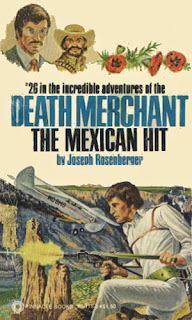 The Mexican Hit opens with Richard Camellion, travelling undercover in Mexico as an English tourist named Justin Alfred Lawrence, being apprehended for drug trafficking, as a big brick of cocaine is "found" in his hotel room by federal policemen.

When Camellion suddenly attacks, he takes the eight men by surprise and eventually guns them all down. One "Mex Fed's skull came apart like a jigsaw puzzle hit by a hand grenade". The Death Merchant also wipes out a half-dozen policemen in the stairwell and a few more in the lobby - doomed, they "might as well have tried to win a maracas-playing contest with a rattlesnake" - before escaping into the street.

The main plot is that Mexican revolutionaries are arranging a huge deal with portions of the American Mafia, trading 640 kilos of heroin ("Mexican Brown") for a shit-ton of anti-tank weapons, heavy machine guns, etc. for their anti-government activities. After the opening shootout, we get two chapters of exposition, one from each side, laying out the plot and what everyone knows. By the start of Chapter 4, the actual story can begin!

This was a pretty straight-forward narrative. Camellion gets a couple of tips on the location of the revolutionary leaders, and he checks them out, engaging in wild gunfire both times. Then he hears about the boat/copter plan with the heroin/weapons, and figures that if the drugs are destroyed, the mob will take the guns back to the U.S., and so he heads off to sink the big yacht on which part of the exchange will take place. Everything comes off like clockwork. Camellion even lays a trap for a double agent.

Some examples of Joseph Rosenberger's odd ramblings on life/death and general philosophy:

The Death Merchant was past being shocked at anything, especially death, which he considered as natural as living. What people really feared was the when and the how. Unlike the man eight feet ahead of Camellion who very suddenly knew when and how! Camellion blew apart his head with a four-round burst of 9mm slugs and watched the yo-yo's hate-twisted features and skull part company, explode, and vanish into the rest of the bloody surroundings. Camellion laughed - We are such stuff as dreams are made of; and our little life is rounded with a sleep! Bull excrement! I wonder what Shakespeare would have said about a mess like this?

Camellion pursed his lips ... Hmmmm. Either heaven is on our side, or else hell has stopped helping the terrorists. The eight of us are still alive. Not one man is wounded. When you get down to the nitty-gritty of it, what's the difference whether we die now or do it a day at a time. Karma? The Hindus and the Buddhists would call it that. We in the West might say Destiny. Yeah, Destiny shapes our ends. So do rich foods. But we're still free to go on reducing diets!

Camellion never gets even slightly wounded in any of these books. Reading how streams of machine-gun slugs narrowly miss him - because he is so intuitive so as to leap out of the way just before the enemy fires - is always hilarious. This segment is nearly a parody:

He was halfway to the wall when an automatic rifle began its vicious coughing to his right - It has to be from the barn! Sounds like a CETME! - and he heard the zip-zip-zip of high velocity slugs slicing into the grass all around him.

He felt a tug along his left hip, but the bullet had not touched the skin. Then two savage pulls on both sides of his right leg, one on the outside, by the ankle, the other on the inside, by his thigh. There were pulls across both shoulders. He felt the air by his right cheek disturbed. A bullet ripped downward through the long bill of his field cap and twisted the cap to the left, proving that the firing was coming from the upper level of the barn.

At another point, a slug is noted to have missed the Death Merchant by only ".16 centimeters", the exact distance noted for another errant slug in the previous book! Camellion's "special relationship" with the Cosmic Lord of Death must give him some sort of immunity from being riddled with slugs. The bad guys - always given names by Rosenberger - are never so lucky:

One .44 JSP cut into [Vinnie] Aiuppa's belly, blew apart his bladder, broke his spine, then tore out his back. The impact was pitching Vinnie against [Sammy] Piletroto, who had caught a .44 bullet in the right bronchus, when another .44 smacked him in the deltoid muscle and ripped off most of his left shoulder. The fourth .44 projectile, sounding like an egg breaking, chopped into Piletroto's right side. The lead sent tiny pieces of shirt flying, tore all the way through Piletroto's longs, shot out his left side, and stuck in the throat of Aiuppa, who was falling.

Also: "Korse is the type of jerk whose hobby would be collecting used echoes!" ... There is an ashtray so full "it resembled a crooked model of the Tower of Babel". ... No one's head explodes like a fruit or a vegetable this time, though one dummy's face is likened to "a pushed-in melon". ... And Camellion retorts at one point: "I've seen better heads on cabbages!"

Rosenberger (and/or his characters) refer to various Mexicans as "chili bean", "hot tamale", "chili pepper" and "bowl of chili sauce". Mexico is referred to as "chili-land". ... An overweight Mexican is referred to as "a tub of Latin lard". ... One of the Mexican revolutionaries, a woman, is described as being "as queer as a four-buck bill printed in Eskimo". ... The few Russians who appear in the book are either "pig farmers" or "Ivans".

The expression "Good God Gerty!" - which has appeared in some of the previous volumes - is uttered no less than four times in the book, though not by Camellion. He often exclaims (to himself) "Oh Fudge!" when things are not going his way.
Posted by allan at 10:36 AM