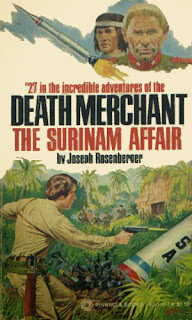 Only two months after his last adventure, Richard Camellion is on his way to South America. (The DM is paid $100,000 (tax-free!) for each mission, but he doesn't seem to have much downtime to enjoy his spoils.) A U.S. spy satellite, which was supposed to photograph Soviet missile installations, somehow went off course and took photos of the U.S. missile sites instead before crashing into the jungles of Surinam.

Obviously, the Russians would love to get the information from WINK-EYE-1's data banks. The Americans need to get there first - and they have hired the Death Merchant to head an expedition. The Surinam Affair is a race against time as the Americans and the Russian "pig farmers" attempt to be the first to reach the downed satellite.

The Russians try to ice Camellion out several times before he can even start the expedition - the book opens with a shootout in a public square - but of course he escapes every time. The NSA has pinpointed the location of the crashed satellite within several miles, and the DM and his crew rappel from a helicopter and, once on the ground, prepare for an arduous hike. They are almost immediately ambushed by Brazilian bandits, whom they proceed to slaughter. Later, they watch two groups of Russians parachute out of a plane - mere preface to the book's climatic battle. Upon reaching the satellite, they discover that the tapes were destroyed during the crash, and there is nothing to salvage.

This is the first Death Merchant paperback in which author Joseph Rosenberger uses the footnotes which became somewhat infamous (relatively speaking, of course) in the later volumes. In #27, he uses about two dozen, most often to translate a foreign phase, something Rosenberger usually just works (awkwardly) into the text. In one case, a British agent refers to the CIA as "you pickle factory boys". The footnote states: "It has never been made clear why British Intelligence sometimes refers to the CIA as 'the Pickle factory'."

As per usual, the Death Merchant's blue eyes are described at various times as "icy", "strange", and "odd". At one point, the Death Merchant stares directly at someone, and he "was suddenly afraid, suddenly conscious of a terror that was nameless". No more than fifteen pages after that, another character "had detected an unfathomable quality in Richard Camellion which had warned him that he was in the presence of a very unusual individual, almost as if this man named Camellion were a member of some alien species". We learn that the Death Merchant is "one of those rare individuals who had total recall". He also uses various breathing techniques as he leads the expedition through the Surinam jungles (Bhastrika, Kapalabhtai, and Ujjayi).

"He's about as cheerful as a sponge!"

"There are 52 bones in the human foot and Richard's pile driver stomp broke 41 of them in the Russkie's foot."

"Caught with their vodka bottles turned upside down, the Soviet force was at a deadly disadvantage."

"As dead as Joe Stalin, the GRU major flopped to the moist ground ..."

"A foot in the door is worth two on the desk."

Camellion "was so unnervingly calm that he might have been going to Sunday dinner with the Waltons!" [FYI: The book was published in March 1978]

"... like an atheist cursing out loud at a Christmas mass being celebrated by the Pope."

"The man had that rare quality of basic honesty, hypocrisy being as alien to him as truth was to the communists."

"They despised communism, considering it just another form of slavery, which it is."