JRR Letter To The Editor, December 5, 1975: "He Criticizes Catholic Church's View Of World"

Joseph Rosenberger lit a firestorm of controversy with a short letter to the editor, published in the Chicago Daily Herald on December 5, 1975:

The fact that 74 per cent of the pregnant teen-agers counseled at Crossroads Clinic, in Palatine, come from Roman Catholic homes (as reported by The Herald) in which "they had little or no sex education, including discussion on emotions and morals," should surprise no one even vaguely familiar with history.

Sex, common sense and progress have always been big no-nos to the church. After Columbus discovered America and thereby proved that the earth was round, universities in Europe were still forced to teach that the planet was flat. The earth remained "flat" for almost 300 years. How could the Popes be wrong?

The same stupid and backward attitude prevails today. The Roman Catholic stand on abortion is only one example, with Catholic pressure being applied on lawmakers to pass laws that would forbid any woman in the United States to decide what to do with the baby growing in her own body! In short, Roman Catholics are dong their damndest to legislate their religious beliefs into the Constitution of the United States! How long must intelligent people tolerate this superstitious cancer eating at the body of American society? 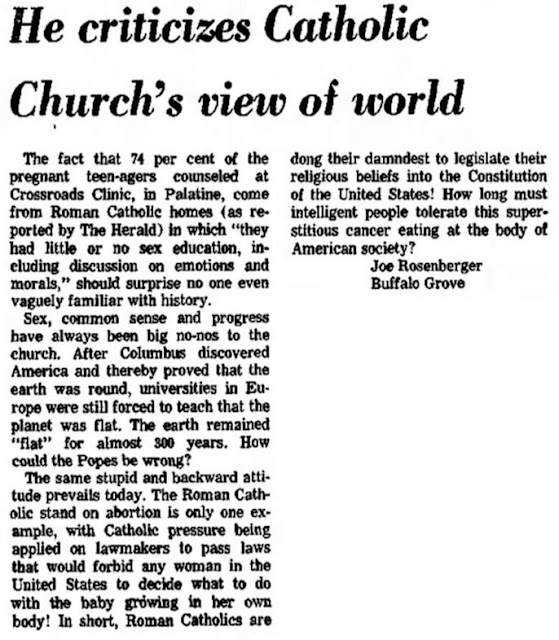 One week later, ten letters were published in response, with eight of them opposing Rosenberger. I can imagine JRR enjoyed stirring up a lot of anger. Another letter in opposition was published three days later. Some highlights:

Where does Mr. Joseph Rosenberger get the audacity to think that a woman can do what she wants with the "baby growing in her womb"? She did not create that baby. Only God can create. Women just have the privilege of procreating. ...

The church has existed for all these centuries in spite of the human weaknesses of its members and will continue to exist long after Mr. Rosenberger is gone and forgotten. ...

Joe Rosenberger's attack on the Catholic Church is both frightening and pathetic. To call Catholics "superstitious" because they believe that every person has a right to life shows not only ignorance of biology, but also an attitude reminiscent of Hitler's death camps.

After reading Mr. Rosenberger's interpretation on how a group of teenagers became pregnant I feel a responsibility to take issue less some unwitting soul read and believe such a fatuous and illogical explanation. ...

Amazing conclusions have been reached through the manipulation of arithmetic but Mr. Rosenberger's suppositions lack an intelligent basis and to the contrary reflect a bigoted attitude toward the Catholic Church. ...

Mr. Rosenberger, this is still a free country and from the content of your article it is immediately apparent that you lack the objectivity to publicly air your opinion on the material contained in your letter quoted in The Herald.

If you are even vaguely familiar with history, Mr. Rosenberger, you will clearly realize that many great men in the history of the world have had their ideas and inventions rejected, including Edison, the Wright brothers and Fulton, to name just a few. The Pope had nothing to do with the rejection of their inventions. In short, we found your letter very hostile toward Catholics for no discernibly good reason. Shame, shame Mr. Rosenberger, your prejudice is showing.

Mankind has always been plagued. Sometimes by drought, sometimes by floods, sometimes by pestilence. But every couple of years that part of mankind known as Roman Catholics have Rosenberger of Buffalo Grove crawl out from under his rock. ...

[T]oo bad your mother didn't share your views when you "were the baby growing in her own body!" Rosenberger, it is you who are the "cancer eating at the body of American society."

I've learned from my own personal experience when anyone constantly condemns and chews at something he personally hates (in your case, Hitler, the Roman Catholic Church), it is just a case of jealousy, pure and simple. Merry Christmas, Rosenberger, under whichever rock you are.

The letter by one Joe Rosenberger of Buffalo Grove is rather infuriating. I only wonder if a newspaper should print such a bigoted letter. It reeks with half-truths. If this man were anti-semitic or a racist, his letter would either be "filed" or ignored. Why was this man allowed to take all those "cheap shots" in his obviously anti-Catholic letter. ...

Sex, common sense and progress are areas where the church admits backward ideas, but in the past 10 years the church has come a long way and maybe even has a long way to go, but it is aimed in the right direction. ...

I was not aware that God was living in Buffalo Grove. After living in Prospect Heights for 20 years I have been enlightened by the "words of wisdom" from Joe Rosenberg. Such statements, as made by him in the Fencepost on Dec. 5. are food for war — the Catholic Church has not professed common sense, has never spoken on sex, nor made any progress since its inception? Where have you been Mr. Rosenberger? I would like to respond to the issues you brought to the readers of The Herald.

Did you not know that Catholic priests are among the finest sex counselors in the world? Has not the Catholic Church demonstrated sound, ordinary sense and progress in the changes and strides they have made over the past century? You sincerely believe that the Catholic Church's stand on abortion is stupid and backward? ...

If enlightened-thinking, open-minded Catholics would stop and think about it, their goals are similar to those who devote time and effort to controlling our runaway population problems.

Both parties might violently disagree on abortion, but both should agree that the best possible solution would be to have no unwanted pregnancies.

Taking the next logical step, how could this be accomplished? Obviously by instituting meaningful, explicit sex and contraceptive education courses in our schools.

Yet those same people (Right-to-Life, etc.) who profess such concern over mother-with-child after-the-fact situations are the ones who yell the loudest when meaningful sex education courses are considered for local school curriculums.

Taking this a few steps further in one jump, those Americans who are not religious had better begin speaking up and asserting their views.

Those who do not believe in religious mumbo-jumbo (and recent statistics show 112.3 million Americans currently do not attend church at all) are going to have to decide whether they want to continue supporting churches.

That's right, even if you don't attend, you're still paying for it.

ITEM: Churches commonly use an ingenious (but not illegal) scheme known as leaseback to share their tax-exempt status with private enterprise business.

Guess what? All the monies that are not collected on church properties, church leaseback schemes with businesses and other goodies like church-owned retirement homes come out of your pocket. You pay these uncollected monies. Think about it.