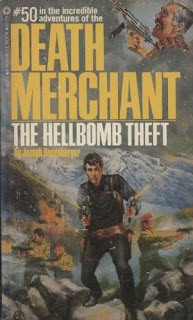 Only three days after the end of his last assignment in South Yemen, detailed in Night Of The Peacock, Richard Camellion is in Frankfort, West Germany, tracking members of the terrorist organization, the Brotherhood.

It turns out the previous mission was only half-completed. Before Colonel al Bin Shaabi was killed by the Death Merchant, he had extensive conversations with Muammar Kaddafi, the "crackpot dictator of Libya". Kaddafi is still expecting delivery of two ADMs (Atomic Demolition Munitions or "Little A's", as the CIA calls them). It's up to the DM (working under the name Norlyn Kester) to find the suitcase bombs before it is too late.

After an explosion at Ramstein Air Force Base, 20 men are found dead and 2 ADMs were stolen. That afternoon, a KGB agent walks into the US embassy in Bonn with information on the two stolen mini-nukes. The bombs have been stolen by a "world-wide criminal syndicate" known as the Brotherhood and the KGB has proof that Kaddafi has paid the Brotherhood $135 million to steal and deliver the ADMs to him. Kaddafi plans to have the bombs smuggled into Tel Aviv and detonated. The Russians end up working with the US to find the bombs and keep them out of Kaddafi's hands.

The Hellbomb Theft includes raids on a furniture factory, a farmhouse, an abandoned brewery, and a castle. After Camellion and his commando crew gain access to the brewery by crawling through an abandoned sewer pipe (they "felt that they were moving within the giant bowel of some alien animal"), author Joseph Rosenberger takes time out to explain how beer is made. And in the big fight at the castle, even after everyone's ammo is exhausted and the men are fighting only with their hands or using empty weapons as blunt instruments, Rosenberger fills 11 pages with intensely-described action.

And in what I think is a first in the Death Merchant series, Camellion is actual shot and wounded during the final moments of the raid. He passes out, only to awaken a few days later in a hospital bed. He is told he nearly bled to death. His next mission, in Peru, will have to wait approximately six weeks until he recovers.

As is usually the case with Rosenberger, it is the non-plot stuff that is most entertaining.

With the Russians and Americans working together, there are plenty of opportunities for political discussions that are little more than pointing out the hypocrisies and bad deeds of each nation (and who supports terrorism more). There is also a two-page discussion about Israel's Prime Minister Menachem Begin. Just because.

In discussing the search mission of the Germans and the fact that the bombs are likely still hidden in West Germany, Camellion notes that the terrorists would not have had time to drive the bombs out of the country:

"[T]hey would have had to drive very slowly through the six villages or else risk arousing suspicion. German traffic police don't take kindly to speeding."

Albert Wittenborn interrupted, saying heartily, "You can say that again, Kester. A driver caught drunk behind a wheel loses his license for one year, even if it's his first offense. It's a good law."

"We should have such a law in the States," tacked on Arnie Stipe, shifting about in his chair. "We don't because the good liberals won't permit such inhuman treatment of drunken trash."

Relaxing on a flight to Munich, Camellion muses about BND agent Paul Richelman and his belief "that war is just around the corner".

Richelman was basing his belief on the predictions of Nostradamus, the sixteenth century French physician and astrologist who had correctly predicted, among other things, the rise of Napoleon in the early 1800s, the coming to power of militaristic leaders in Italy, Germany, and Spain - Mussolini, Hitler, and Franco - the two world wars and World War III.

If one was to believe Nostradamus, World War III would break out before 1986, a world-wide conflict in the U.S., England, and France, and religious persecution in Poland. West Germany, the most powerful nation in Europe, would be invaded by a Soviet-Arab army that would land on the Mediterranean coasts of Italy and France. The war would last three years and seven months. Western Europe would be occupied by the Soviet Red Army for two years. Paris and Rome would be completely destroyed.

The Soviet Union would eventually lose, suffering a series of serious defeats at the hands of the Americans. One such defeat would be in Italy, another one somewhere in the Alps. The final Soviet defeat would take place in Armenia, now a part of the Soviet Union and of Turkey.

The Death Merchant knew that world trends and indicators now had a striking similarity with those in 1937, 1938, and 1939. His own research indicated that ...

Richelman had said to Camellion, "Nineteen eighty-two will be the beginning of riots and civil disorder in the United States. The danger of the United States begin involved in a war is very great in 1983. You see, Herr Kester, Mars is forming a conjunction with its midheavens." As an astrologer, Richelman had made a chart for Washington, D.C., and explained that, since the planet Mars is related to military activity, the implications that the United States would be involved in a world war - "Or at least a major conflict!" - were extremely apparent.

Frightening? Not to the Death Merchant, who knew that it was ignorance and a lack of knowledge of man's true role and place in the Universe that generated fear in society, especially fear of the unknown.

Camellion smiled softly to himself. What would the "man-on-the-street" think if the United States government announced that for the past seventeen years the government had known that an intelligence from outside our own "Milky Way" galaxy had been "observing" Earth for thousands of years and, over the years, had made contact with certain individuals on this planet. [A footnote refers readers to two Death Merchant books: The Shambhala Strike (#30) and The Bermuda Triangle Action (#37) as proof!] ...

Men in general are not meant to know certain things, certain hidden knowledge that, if known to the world's people, would destroy them.

The Death Merchant knew it. Paul Richelman knew it. Both knew that the creature called Man is a bridge between two worlds, the earthly and the supersensitive, between the "real" and the "unreal".

Rosenberger continues for another two pages, culminating in an anti-religion rant. Camellion agrees with Richelman that "America is now in danger from crackpots who believe they are doing the 'will of God'":

The Moral Majority - in reality a minority of self-righteous loudmouths - were shredding the spiritual fabric of American society by their constant attack on diversity of opinion, threatening through political pressure and public denunciation anyone who might dare disagree with their Hitler-like authoritarian positions. Bible-pounding boobs who peddle coercion, who go about pressing for "truths" and "doctrines" that are dangerous fairy tales of nonsense. The same idiots who maintain that "God doesn't hear the prayers of Jews!" Uneducated, steeped-in-stupidity polyester "mystics" who have brought about a resurrection of bigotry that is manifesting itself in racism and discriminatory postures!

Later, Camellion and a German named Bruno Zeitenhausen discuss "law enforcement efforts" in the United States. It turns out that (coincidentally!) Zeitenhausen holds the exact same opinions as most of the DM series' characters: he blames minorities for everything bad.

"It is not the fault of your American policemen," Zeitenhausen had said. "It is the fault of your politicians who kiss the arsch of the so called minorities, the blacks and the browns who have already wrecked your nation with violence. It will become worse, with riots in all your cities. It will happen because you Americans do not know how to control the savages in your midst. There is nothing more destructive to any society that the unequal philosophy of 'equal rights,' which conveniently ignores equal responsibility. American, your nation has already been invaded. The 'Hun' is already in your midst."

Camellion agrees: "Liberals always condemn violently anyone who disagrees with their bigoted doctrines."

With Rosenberger needing to describe every gun being used and the caliber of everyone's ammunition - he did this much less in the earlier books, so I assume this was the trend in the industry - the action scenes get a bit clogged:

The Death Merchant jumped back in time. A wave of 5.56 x 45mm (or .223 Remington) and 7.62mm x 25 Tokarev projectiles flooded over the two doors and turned the thick glass into a million pieces of sharp fragments. ...

The night "was as black as the inside of a barrel buried in concrete".

The barn was "deserted - as empty as the head of a Russian peasant".

Jablonsky: "a Czech so fat he must have left stretch marks on any vehicle he entered".

"Ridiculous! That pig farmer from Mother Russia is better dressed than any of us. How does a peasant from the land of the red oink-oink rate a suit from an exclusive men's shop in London's Savile Row?"

"The sows in the barnyard of the Soviet Union tend to be as lumpy (in the wrong places) as a flophouse mattress."

"Our consciousness is only a value that permits but a few drops of awareness to trickle through, just as much as is necessary for us to stay alive on this particular little dot of a planet - without our going stark raving mad!"
Posted by allan at 7:33 PM No comments: