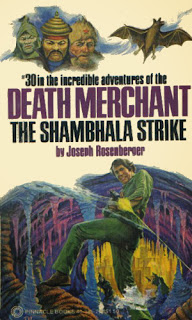 In Hell in Hindu Land (DM #20), it is mentioned that alien beings, having traveled to Earth millions of years ago, established three bases on our planet. One installation was beneath a monastery in the mountains of India (Hell in Hindu Land), a second was located under the North Pole (The Pole Star Secret; DM #21). A third base was constructed off the U.S. coast, near the Bermuda Triangle.

Well, author Joseph Rosenberger either changed his mind about where these alien bases are located or he created a fourth base, because in The Shambhala Strike, Richard Camellion (aka the Death Merchant) heads to the Middle East in search of the fabled subterranean metropolis - and meets up with (and chats with (!), via telepathy)) one of the aliens mentioned in the previous two volumes. Camellion and his fellow fighters (including CIA man Vallie West, a recurring character in the series) also get to use some cool alien technology to defeat a force of 450+ Chinese soldiers who are also intent on reaching the alien city for nefarious purposes.

Rosenberger writes of a gigantic system of caves and tunnels underneath the countries of Tibet, Bhutan, Manchuria, Mongolia, Kurdistan, and Afghanistan. A sentence that claims this underground city contains "miraculous inventions" and a history of the human race going back 17 million years is footnoted with the statement: "The legend of Shambhala is genuine; we did not invent it for the sake of this story." ... See the legend of Agharta (also).

After trekking through the Himalayas, Camellion and his party of 13 others come to the entrance of the tunnel. As they go deeper into the tunnel, it gets wider and taller. They come to a huge barrier, blocking further passage. the barrier is glowing, the same kind of glow Camellion witnessed at the other two alien bases. A door opens in the barrier and they pass through.

After they walk several more miles, the tunnel opens up into "another world". They are stunned by a "fantastic panorama stretching out before them". As far as the eye can see, there are "rock-covered hills and outlandish vegetation" as far as the eye can see. "None of them could see the northern end or the east and west sides of the cavern". The ceiling is roughly one mile above their heads.

They meet three aliens, called Goros, who are able to communicate with Camellion and the others telepathically. They also know everything about each of the people in the DM's party, including the Merchant of Death himself. Camellion gets a telepathic message from one of the Goros (who also make reference to the "Cosmic Lord of Death") meant solely for him:

"You are also the man of death, the Death Merchant. Your secret is safe. No one else can hear me."

There are a total of 40 Goros in this world, taken from the surface world 18,000 years ago by the Inelqu, the aliens who first came to earth. The Goros, for reasons that are not clearly stated, want the Death Merchant's party to kill the Chinese soldiers, who are advancing on the cavern from another tunnel, one large enough to drive tanks and armoured carriers through.

After the first battle with the Chinese, one character figures the odds now stand at "ten of us against a couple of hundred chopsticks!" (More on Rosenberger's racism below.)

Camellion and his team are taken inside a huge dome, where one of the Inelqu is awakened. Inside this room - which is similar to the room of aliens Camellion saw in India - are "such abysms of hideous impossibility, such grotesque contradictions of universal order, "something horribly remote and distinct from mankind" and "something frightfully suggestive of ancient and unhallowed cycles of life in which earth and human concepts had no part, no existence". Camellion takes all of this in stride, of course, and Rosenberger doesn't really have any of the others freak out all that much, even after the Inelqu explains mankind's origins, reveals the aliens' original planet and means of traveling to earth, and the existence of another group of aliens, the Flimmms, which warred with the Inelqu, and led to the establishment of many of the world's myths and religions.

To ensure the Death Merchant's victory over the Chinese, the Goros allow them to use a bullet-proof flying craft (constructed out of "kkokro metal") that allows them to soar over the Chinese soldiers and drop five-pound packets of explosives on them. Before they take off, though, Camellion and West have a totally believable conversation (complete with a footnote!) about setting the timers:

"Rick," [West] had said, "the height we use will determine the number of seconds we click off on the timers. I suppose you know that for purposes of standardization, the acceleration due to gravity is g equals 998.665 cm/sec. to the second power?"

"I know, Val. It's also a matter of dynes*. Since the Earth rotates, the weight of a body is somewhat less than the Earth's attraction for it, because of the centrifugal force, and in general is not directed toward the Earth's center. You take a plumb line ten feet long in the latitude of New York. Okay, this line departs about a quarter inch to the south, from a line in the direction of the Earth's geometrical center."

"Which adds up to what?" Vallie had asked.

"Well, this same influence accounts for the oblateness of the Earth, and these two facts together account for the variation of gravity from equator to poles - a fact few people realize. At the equator the weight of a gram mass is 977.99 dynes. At the poles it exceeds 983 dynes."

*: The dyne is the unit of force in the C.G.S. - centimeter-gram-second system of physical units. It is such a great force that, under its influence, a body whose mass is one gram would experience an acceleration of one centimeter per second per second - yes, two "per seconds.

What this has to do with setting the timers for approximately 18 seconds - while flying around in a huge cave miles beneath the Earth's surface - is anyone's guess. Anyway, this attack is merely a prelude to the climatic battle, most of it hand-to-hand combat, which is recounted over 16 (!) pages.

The DM and his crew emerge victorious and the book ends abruptly. The Goros tell Camellion that after he and his group are back on the surface, the entrances to the three tunnels will be sealed up forever and no one will stumble upon this underground world again. Camellion's reaction is pretty much, "Okay, cool. See ya." before heading back with the others ... in fact, he's already thinking about his next mission. And so Rosenberger, like he did in the previous two books, attempts to mix in a little science fiction, but then once the fighting is done and the enemies are dead, he completely drops the aliens subplot.

Rosenberger also goes wild throughout the book with racial slurs (especially during that big end-of-book fight), often referring to the Chinese soldiers as riceballs, chinnies, and gooks. Also "chopstick chaps", "Chopstick Charlies", and "the chopstick stupids" - which sounds like the name of a punk band). Individual soldiers are called "wonton weirdo", "Peking pervert", "Mao moron", and "'ah-so' dummy". Rosenberger even has one of the Chinese military officers asks a peer: "Aren't you letting your imagination run wild and unchecked through the rice paddies?"

Some amusing lines that makes you know you are reading Rosenberger:

"Camellion, you're talking like a man with a retarded wisdom tooth."

"... and Commie scouts and soldiers from the main body were being killed faster than a fruit jar full of moonshine at a Kentucky hoedown."

"...perpetually amazed, somewhat like a man who had bought a pair of water skis and was disappointed because he could not find a lake with a hill."

"The intelligence service of India was as useless as snowshoes on an Arab."

While spending several pages recounting the unnecessary back story of Helen Banya, a Soviet defector who (for reasons not worth explaining) is part of the expedition, Rosenberger refers to her "ample lacteal endowments". What a romantic!

In all of the DM books, Camellion does not curse. (I guess Rosenberger didn't want his main character setting a bad example - while slaughtering scores of people - for any youngsters who might be reading.) Instead, Camellion says/thinks things like, "Hammer my hamhocks!" and "Go suck stale ding-dongs, you dumb dodos!"

Note: I first learned about the existence of the Death Merchant earlier this year from Joe Kenney's always-entertaining blog, Glorious Trash. If I recall, reading Donald Westlake's Richard Stark novels (and looking for information online) led me to Max Allan Collins and his Nolan series, which pointed me towards Don Pendleton's The Executioner, which led me to Joe's blog. He reviewed this volume of the Death Merchant here.
Posted by allan at 2:28 PM