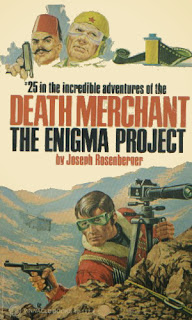 In The Enigma Project, Richard Camellion joins the Jasper Grundy Bible Study Institute's expedition to climb Mount Ararat to ostensibly search for Noah's Ark. (The book's cover shows a decidedly undashing Camellion - what is with that hair? - on a mountain peak strangely devoid of snow and ice.)

The Institute is actually a CIA front, although the various Grundy men on this expedition are unaware of that fact. Camellion (and two CIA men) are posing as mountain climbers going along with the group. Their actual mission is to photograph Soviet satellite-tracking stations from the top of Ararat.

Before they even start their climb, the Camellion/Grundy expedition is ambushed by Kurdish bandits. At various points on the mountain, groups of Armenians and Russians set about to kill the members of the expedition. (The Turkish government has allowed a Russian expedition to climb Ararat from the other side. That party, led by Dr. Filatov, is also searching for the Ark.) But led by the Death Merchant, who eventually has to come clean about his purpose in the group, they wipe out these enemies and continue on with the climb.

Joseph Rosenberger must have done a lot of research into mountain climbing, as he describes what is involved in extreme detail. The setting - most of the book takes place while climbing the mountain - makes the book a bit duller than the usual DM fare.

The Death Merchant, in addition to his awesomeness as a killing machine, is also "an expert at detecting the foibles in human nature and a past master in reading body language". This comes in handy after he takes a Russian GRU agent captive and tortures him to get him to reveal some information about the "pig farmers" climbing the mountain's other side.

The captured Russian "confessed that Dr. Filatov and some other Soviet scientists feel that the Ark could be an intergalatic space vessel". The men from the Institute laugh at this suggestion, but Camellion keeps quiet, and recalls both the extraterrestial base he saw at the monastery in India and the vast hollow land he explored beneath the North Pole. (Rosenberger actually includes footnotes identifying the two books, Hell in Hindu Land and The Pole Star Secret.)

The expedition makes it to the summit and Camellion sets up his camera, which takes a number of photographs. Knowing that the Russians are likely lying in wait for them to come down the mountain, they take an alternate route, and come at the Russians' camp from an unguarded angle. Camellion and the others wipe out the Russian party, but they suffer significant casualties. The only survivors are Camellion, CIA agent George McAulay and Mehmet Cirkelok, one of the guides (and a Turkish intelligence agent).

Camellion and the other two men simply head down the mountain, barely mentioning the possibility of the Ark's existence. Rosenberger lets the "Ark as spaceship" possibility dangle for a bit, but then (like he did in the earlier two books), he never comes back to the subplot.

While Camellion never really opines strongly on religion, he does seem to believe that there was once a "primordial vapor canopy" above the Earth - and he actually quotes several sections of Genesis as proof! ... That doesn't sound at all like the anti-religious know-it-all of the earlier books.
Posted by allan at 4:52 PM