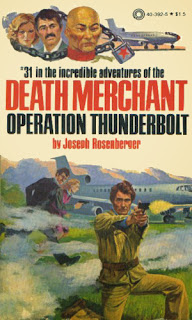 Operation Thunderbolt was the 12th Death Merchant book published by Pinnacle during the years 1977 and 1978. Joseph Rosenberger turned in one manuscript every other month, like clockwork, for two years! That's a tremendous workload, even by the grind-'em-out standards of the men's adventure pulps field. (And it looks like his pace continued into 1979.)

In #31, the CIA sends Richard "Death Merchant" Camellion to North Korea to rescue Dr. Douglas Hausheer and his wife, two of the 37 survivors of a plane that was forced to make an emergency landing. (The plane was "blown off course during a severe storm"; is that possible?) Unbeknowst to the North Koreans, Dr. Hausheer is a scientist working on a top secret ultrasonic bomb for the U.S. Camellion's mission: Get the Hausheers out of North Korea or, failing that, kill them. Either way, Hausheer's scientific knowledge must not fall into the hands of the enemy.

Camellion pretends to be a journalist from Australia, and the book opens with him getting a tour of various sites, including the Sinch'on Atrocity Museum, which was "the most vicious and ridiculous example of black propaganda the Death Merchant had ever seen". Back at his hotel, Camellion receives a message that a CIA contact wants to meet. But before Camellion can do anything, four Korean officers are at his hotel door, accusing him of being a spy. The Death Merchant uses martial arts to disable all four, taking one man with him down through the lobby (killing a few more Koreans along the way) and into an alley where they take a car to the contact's address. There, Camellion is introduced to Kang Ban Sok, and they discuss where the airline passengers are being held, how heavily they are being guarded, and how possible is it to break them out. The Death Merchant is highly skeptical: "The whole scheme has got more kinks than a two-dollar garden hose. ... This strike was the biggest gamble he had ever undertaken."

But Camellion - who is in disguise for most of the book as a 70-year-old Korean going by the name "Kim Cho Wang" - formulates a plan to get the Hausheers and the other passengers safely across the DMZ and into South Korea. (The pilot of the downed plane exclaims: "My God! Your plan is so crazy it might even work!"*) The multi-part escape takes up most of the second half of the book. The action is all right - at one point, Camellion notes "what we're doing beats bone testing in a ladies'-corset factory" - but it was somewhat confusing as the three-part Korean names all ran together. It was sometimes difficult to remember who was on which side. (I think even Rosenberger got confused, with one character apparently fighting for both sides.)

* The pilot, Dennis Wilburn, is impressed with this "Wang" character. He remarks that "Wang could spend six months in a cave and come out with a suntan." ... Earlier in the book, someone else exclaims about Camellion: "A strange and weird person. A first-rate killer with the education of a philosopher! Incredible!" (The DM quote that prompts this description is "Mankind is a victim of collective amnesia." Not all that deep, philosophically.)

Among the bad guys we have: Chim Ki Wu, Gin Ki Ping, Sasip Wong Yong-ri, Obu Hu Dang, Cho Ip-Poon, Lee Jwa-ye-t'anh, Yon Gip Kajang, and Bigiru Kowdow, among others. (There is also a weapon called a Hanko-ji'gok and the NK police force is known as the Ju-sun-kyong.) Thankfully, Rosenberger does not fully indulge his habit of identifying every single man fighting (and then dying) against the Death Merchant this time around.

After the copious anti-Asian slurs that littered the last book, The Shambhala Strike, I was intrigued to see Rosenberger's author's note at the front of Operation Thunderbolt:

In this book I used the word "gook" in referring to the North Koreans. Certain liberals object to this word.

By "gook" I mean precisely an uncivilized Asiatic Communist. I see no reason for anyone who doesn't fit this definition to object to the way I use it.

Because, hey, why be bothered or concerned about anything if it doesn't affect you personally?

It turns out Rosenberger doesn't use the term "gook" nearly as many times as I was expecting (I counted only 40 or so instances). There are also a few references to riceballs, rice-eaters, and Nips.

"By 1990 there will not be a United States. There won't be any civilization. ... 'The world shall be put into trouble by three brothers. Their enemies will seize the New City by the water, hunger, fire, blood, plague, and all evils doubled.'"

A serious look crossed [CIA agent Geoffrey] McKenna's face. "I've read Nostradamus, too. I've got to admit that his prophecies, down through the centuries, have been very accurate."

"According to him, World War III will start in Red China, and the entire U.S. will be destroyed by nuclear weapons," Camellion said. "As he wrote in one Quatrain, 'The Sky of the New Land will burn, its cities a new ash to form.'"

At the very end of the book, Camellion gets some horrible news: Jesus Sontoya, the handyman at his ranch in Texas, has been murdered. McKenna says: "The consensus is that someone is out to neutralize you. There's a deadly manhunt going on and you're the target..."
Posted by allan at 5:10 PM