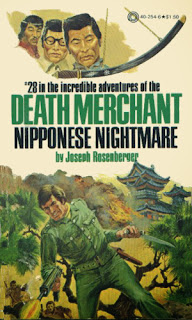 The United Red Army (Rengo Sekigun), a Communist terrorist organization operating in Japan, is planning several assassinations around the world in the hopes of starting a planet-wide revolution. Obviously, these "commie crackpots" - who may be getting some help from North Korea - must be stopped.

Nipponese Nightmare begins with Richard Camellion attending a strategy meeting at the house of Amida Chogomiga, a member of Kompei, the Japanese version of the CIA. The house is in a wealthy neighbourhood ("Chogomiga certainly doesn't have to eat rice every day", the Death Merchant muses). While Camellion and the various Kompei agents discuss what to do, the house is attacked by the URA and the first of several shootouts is underway.

Camellion and Shiki Brown team up to invade a strip club run by Kato Honjuji, who is suspected of being a URA sympathizer and using his club for meetings and as a place to store weapons. The two men actually interrupt a URA meeting in the basement. A fierce gun fight follows, with the DM discovering afterwards that Honjuji was killed by the URA ahead of Camellion's arrival.

Left with no real leads on the URA, Camellion proposes invading the North Korean embassy and kidnapping someone important, assuming he or she will possess some information on the URA. Everyone says attacking the "self-contained fortress" is a suicide mission, but the Death Merchant chides them all for a "lack of imagination".

A doorman at the NK embassy has been feeding the Kompei information and from him they learn about two employees who leave each Friday afternoon to shop for food for the embassy staff. Camellion uses his masterful skills at disguise and makeup to make two agents look like these two workers - and they are able to drive into the embassy grounds (with Camellion hidden in the car). The three agents storm inside and a wild battle takes place. Killing everything that moves, they race through the building floor by floor, eventually reaching the roof. It turns out that there are three survivors on the roof who surrender: a man, woman, and child. The man is Ho Ick Chang - amazingly, the man the Death Merchant had hoped to kidnap. What luck!

From Chang, they learn about a big meeting at a castle owned by Baron Okumiya. Camellion plans a four-man attack on the huge, nine-floor castle. (This is either the third or fourth castle that Camellion has decimated in the series already.) Towards the end of the book, Camellion battles Kiyoshi Zuikaku, the head of the URA:

A high-pitched scream of rage rolled from Zuikaku's mouth and he streaked toward Camellion, the sword raised high above his head. At the very last moment, the Death Merchant ducked, jumped forward, and swept his right hand toward the floor as the deadly blade swooshed over him. Very fast, Zuikaku raised the sword, spun around, and brought it down in a two-handed chopping motion.

Clang! The blade found not Camellion but the blade of the o-dachi that the Death Merchant had scooped up from the floor. Astonished, Zuikaku drew back. The Death Merchant jumped to his feet, smiling and saying, "Don't let a star fall on you, stupid!"

Desperate now, Zuikaku attempted another maneuver, but again the Death Merchant blocked the stroke, the two blades ringing loudly together. However, the thrust had brought Zuikaku closer to the Death Merchant, who expertly smashed him in the belly with a right-leg sokuto geri sword foot-kick. Zuikaku screamed in the worst pain he had ever known in his life.

He saw the blade in Camellion's hands coming his way but he was powerless to do anything about it. He never knew it when the sharp steel cut threw [sic] his neck and his head bounced off. The eyes kept right on blinking as the head fell to the floor. Headless, the stump of neck pumping blood, the corpse sagged to the floor.

One of Rosenberger's trademarks is his minute descriptions of the trajectory of, and the damage done by, seemingly every bullet fired by the Death Merchant. Here, he actually describes the path of several pellets from a shotgun!

The shotgun blast had done its work on the two men twenty feet away. All the Double 00 buckshot had missed, except three pellets. One pellet had struck a man in the eye, blinding him and coming to a halt in the front lower portion of his brain. A second pellet struck the second man in the mouth. The third pellet sliced into the hollow of his throat, the entrance wound the size of a penny, the tiny ball of lead lodged in the windpipe. Choking to death, the Japanese clawed at this throat, sank to his knees, and was 99 percent dead by the time Brown leaped over his jerking body and pumped a new shell into the shotgun.

Rosenberger indulges in his usual level of casual racism throughout the book. Enemy gunfighters are referred to as "slant-eyes", "slopeheads", and "rice eaters". Even Shiki Brown, the Japanese-American CIA agent, uses the term "Nips".

I'm surprised to report that some of Rosenberger/Camellion's deep thoughts and pontifications actually make a little sense:

"I have found there is always a grain of fact to any myth."

"Happiness is nothing more than health and a poor memory."

"Human history is nothing more than one long boring tale of a slaughterhouse."

In many other cases, however, Rosenberger's writing either does not make sense or is just plain silly:

"Always expecting the worst, Camellion would not have been surprised if Adolf Hitler, carrying Joe Stalin on his back, had hopped into the kitchen on a pogo stick!"

"Get set to run faster than an Israeli trapped in the middle of Syria."

"His short scream died away on a coagulated mishmash of drowning agony."

"[Naruse's] glance held the contempt of a film critic looking at Popeye the sailor."

"You funky frankenberry!" (spoken in anger during a shootout)

Finally, we get a couple of new facts about the mysterious past (and mind) of the Death Merchant.

A Kompei agent mentions to Camellion: "I am told you used to teach on the junior college level." (In previous books, Rosenberger had hinted that Camellion used to be a high school teacher in St. Louis.) At a Kompei safe house, Camellion asks for a glass of vegetable juice, and someone cracks, "Don't tell me you're a health nut? If you are, you're certainly in an odd business!"

The Death Merchant had a pet hate list that would fill all of the New York City telephone books, even the Yellow Pages! Near the top of the list were people who invaded his personal privacy, big mouths who probed into his habits.

Naturally, in the previous 27 books, we've never received even a hint of the things on Camellion's alleged lengthy "hate list" (besides religion). If anything, the Death Merchant seems to do his own thing and not be overly bothered by much around him, since he's usually on assignment or at his Texas ranch.
Posted by allan at 11:25 AM