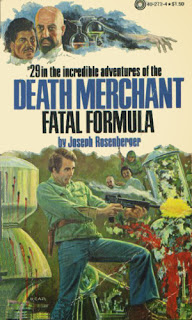 Richard "Death Merchant" Camellion is tasked with the job of organizing the kidnapping Dr. Anna Trofimov, a Russian biochemist specializing in bacteriology. She has been working on germ warfare and may have hit on something known as the Voltec Formula, a potentially deadly strain of flu virus.

The United States is worried that the Russians may not be able to contain the killer virus. If it leaks, it could destroy the human race in two months! (Of course, the Americans prove no better at keeping killer viruses under wraps. A similar type virus got loose in a secret U.S. lab in Utah and killed 15 scientists, but (naturally) no one suggests that the Americans are as incapable as the Russians.)

After a different kidnapping goes awry in the opening of the book, the DM and two members of the Banderists, an anti-KGB group, escape and hide in an attic two floors about a cafe before being smuggled out in the bottom of a garbage truck. We next join Camellion on board a nuclear submarine where he is told about his real mission. Camellion - along with CIA man Sidney Dormar and two Turkish intel agents, Turhan Paksu and Nurettin Sevik - travel from submarine to fishing boat to truck on their way to another hiding place in a farmhouse. There's no real reason to include the initial kidnapping attempt (it is supposedly to throw the KGB off the trail of the real mission) or for the men to do so much traveling. It just seems like a way for author Joseph Rosenberger to fill pages.

The obvious endpoint of the book is when Camellion stages an assault on the secret Russian laboratory in which Torfimov has been conducting her experiments. The preparation for, and the pre-dawn approach of, the lab is quite drawn out, as is the big battle throughout the complex. But Camellion comes out on top, taking Torfimov and two other scientists captive while destroying the lab and all strains of the the virus. ("His agreement with the Cosmic Lord of Death was intact, the seal unbroken.")

Once again, Rosenberger doesn't disappoint with his pseudo-intellectual asides:

Cooped up in the underground room [at the farmhouse], the men found the waiting intolerable, each hour a day, each day a year. Every man except Richard Camellion, who knew that time is an illusion, who knew that while we remember the past, we plan the future but act now. The "now" is a single instant of time. each instant of time becomes the "now" when it happens. The year 2000 is in the future. In the year 2000 it will be "now." One day, in 2001, it will be in the past. The past, the present, the future are linguistic. But they are not physical. And the Death Merchant knew it. In any case, even an "eternity" must end and the final second enlarge, by a single second, the "past."

Elsewhere, Rosenberger offers what he calls a "coincedence-generating principle":

While the existence of Fate is pure philosophical speculation, there is a synchronism, a meaningful linkage of facts, that transcends the space-time-cause universe.

Once the Russian lab is destroyed, the Death Merchant and the others make their way through a rain/wind storm to meet the Banderists' boat. Rosenberger goes all out describing the weather conditions:

As yet the wind had not risen to full fury; the storm was still building. However, the wind was strong enough to shape the rain into twisting sheets, contorted walls of water that impeded progress with a malice, with a malevolence from which there was no escape. Booted feet slipped on rain-wet rocks and sank into sand-mush. Whips of rain furiously slapped faces while long, jagged streaks of blue-white lightning stabbed out of the angry clouds, each thunderbolt seeking - seemingly - the pathetic little group fighting for existence.

Camellion, whose birth date is given as July 14, is described as being "clever enough to sleep on a greased corkscrew". ... And then there is this sentence: "The CIA man had the nervous system of an armadillo: There wasn't any danger of his getting a hole in his bag of marbles." Whaaa?

Lee E. Jurras gets several mentions, including Camellion saying at the end of the book that he is going to visit Jurras in New Mexico because the gunsmith has some "new goodies" for the Death Merchant. Rosenberger has mentioned Jurras a couple of times in every one of the last 8-10 books. I'm just about convinced Jurras paid him for the plugs!

The saying "Fool me once - shame on you. Fool me twice - shame on me!" is identified as "an old Russian proverb". I found this online, but do not know if it is reliable:

Among the old sources mentioned for this proverb in The Oxford Dictionary of Proverbs by Jennifer Speake (ed.), Oxford University Press (2008) is this quote from The Court and Character of King James by Anthony Weldon (1650), page 52: "The Italians having a Proverb, He that deceives me Once, it's his Fault; but Twice it is my fault.