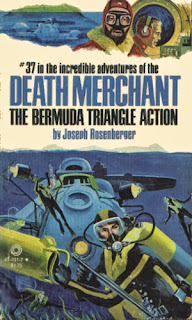 This may be the first Death Merchant book that doesn't begin with whatever Richard Camellion is doing. In Chapter One, we meet some Russians/Cubans working on a construction project off the U.S. coast in the general vicinity of the Bermuda Triangle.

Camellion first appears on page nine, doing some reconnaissance work related to the Russians' project. The pig farmers are up to something in the Atlantic Ocean and the U.S. has called on the Death Merchant to find out what it is. Along with CIA man Josh Forran, Camellion scuba-dives up to the Russian installation, killing four Ruskies along the way. There is a gigantic domed structure, as well as nine buildings/modules connected by huge pipes.

It seems clear that Camellion's earlier guess about the purpose of this activity was totally on the mark: the Russians are drilling along a fault line, and a few well-placed hydrogen bombs could cause catastrophic floods and damage along the U.S. east and south coasts. (Non-Spoiler Alert: The undersea complex is eventually destroyed.)

The Bermuda Triangle was more of a cultural phenomenon in the late 70s, so I was wondering how Rosenberger would play it (this book was published in early 1980). It is taken for granted by both the American and Russian forces that something mysterious and deadly is happening in this part of the world. Rosenberger recounts the disappearance of various ships (including a US sub with a crew of 320 men that vanished three months only earlier) and airplanes in the area also known as the Devil's Triangle. Camellion expands on this topic, talking about the disappearance of large groups of people from other parts of the world. 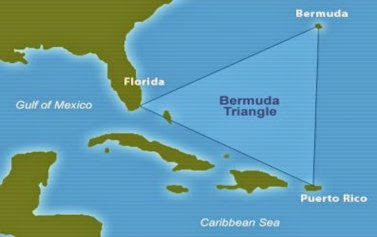 The Death Merchant explains his beliefs regarding the Bermuda Triangle:

"We're crawling around on a speck of dust that's revolving around a middle of the road star in the boondocks of our galaxy; yet we still have the nerve to think we're 'special.' It's that kind of stupidity that forces scientists - most of them - to close their eyes to the true secret of the Bermuda Triangle. ...

"My own hypothesis is that the Bermuda Triangle and other maritime areas are 'points of entry' into a different reality, probes controlled by aliens that employ techniques involving manipulation of space and time. ...

"This world appears real to us because we can sense only one microscopic slice of this underlying reality at any particular time. This mode of reality would also explain the mechanism operating behind telepathy, precognition, clairvoyance and other paranormal activity. ...

"The problem is that we don't have the right kind of instruments to detect these alien energy forms."

So: (1) What is "the true secret" of the Bermuda Triangle to which science has thus far been blind? (2) And how will Rosenberger treat this possible entry point "into a different reality"?

Answers: (1) We are given absolutely no idea. (2) He won't. It's yet another instance of the author introducing and then ignoring an alien/supernatural subplot.

On their way in a small sub to initially check out the Russian underwater construction, Camellion and three others encounter a huge craft in the water, which turns slightly to face them before zipping away at a high rate of speed. The men immediately assume it must be otherworldly life, but once the craft leaves, Camellion immediately forgets about it, and is focused only on getting the job done. Upon returning from his mission, Camellion finds a strange pyramid and a box in the sub, two items apparently left by the aliens. I was wondering how the aliens (or the large craft) would figure into the final clash with the Russians, but Rosenberger never mentions the craft (or the two objects) again.

Various snips: "The average pig farmer is so dumb he runs around his bed to catch up with his sleep." ... "Our schedule is tighter right now than the tail feathers on the rump of a prairie chicken." ... "Richard Camellion was not only the most cold-blooded man he had ever seen, but he was the twin brother of catastrophe, a man whose natural habitat was the bleak and dark landscape of Death." ... "Whoever or whatever Richard Camellion was, he didn't need anyone. Nor did he seem to feel anything. And one always had the impression that there was something alien about him ... another kind of presence staring out through his eyes."

Rosenberger goes overboard on describing the mayhem with food metaphors:

"The other Cuban, Andres Fonseca, took the .357 Magnum slug from the right AMP just below the hollow of the throat, the impact of the dynamite-powered slug opening a hole in him the size of a lemon ..."

"The PPS in his hands roared, the muzzle flashing fire. Koloviev jumped on the driver's seat, and his hands left the steering wheel of the fork lift as his head exploded like a melon hit by buckshot."

"The 150-pound hook, swinging from the end of the boom on 4 feet of steel cable, pulverized their heads the way a sledgehammer would splatter an egg. Skull bones exploded, and gray-white brain matter shot in every direction, at the same time the bottom girders made pulp of their shoulders, backs, and chests."

"In a low crouch, the Death Merchant fired the AMP and the Ingram. A swarm of 9mm Ingram projectiles erased Jose Matar's face and popped open his skull like a lemon hit by a blast from a double-barrelled shotgun."

"Camellion had shot Chevsky; at the same time he had kicked in the scrotum of the cockroach who had tried to smash him with the butt of a Stechkin, the toe of the Death Merchant's weighted Neoruperine boot flattening the man's testicles like a pancake."

Also, in the aftermath of a battle in which Camellion used several incendiary grenades, the dead bodies "gave off the strong odor of a barbeque at a family get-together."

Rosenberger was not a big fan of Jimmy Carter, referring to the former U.S. president as stupid, "weak and an unrealist", and accusing him of taking the side of Communist revolutionaries in Rhodesia (an actual issue back in 1979) "to obtain the good will of American blacks". This is an obvious sore point with Rosenberger, as he has in previous books criticized U.S. politicians for basing their decisions on how to best appease blacks in America.

Rosenberger/Camellion ridiculed Nixon in the early books (towards the end of his second term and mostly over his resignation from office) and now Carter gets slammed. I'm curious what Rosenberger will make of Reagan as this series moves into the 1980s.
Posted by allan at 11:05 AM 1 comment: