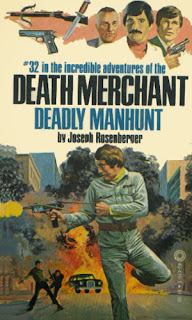 After thwarting a potential roadside ambush upon his return from South Korea, Richard Camellion is back at Memento Mori, his ranch in the Big Thicket region of Texas, where his handyman, Jesus Sontoya, was recently murdered. Sontoya's death was meant as a warning to the Death Merchant. Someone is gunning for him.

Camellion enters his house through a secret entrance to make sure there is no one waiting inside. He searches the house before going into several well-protected underground rooms, in which he stores his disguises and weapons arsenal ... and shoeboxes full of $100 bills. (The DM receives $100,000 cash (tax-free!) for each of his missions for the U.S. government.)

Camellion heads to Langley, Virginia, to meet with the CIA's Deputy Director of Operations and get the lowdown on this new threat. Camellion is convinced someone with the CIA has ratted him out. On a hunch, he asks for the files of agents who have resigned or retired in the last five years - and finds that two men ended up working security for the same metal company in New Jersey. It turns out that this company happens to be (ultimately) owned by the Silvestter family. It was Cleveland Winston Silvestter - the self-proclaimed son of Satan - that the Death Merchant battled and killed back in Billionaire Mission (#8). Plus, Camellion recognizes the face of Silvestter's 25-year-old son as the man who escaped from the ambush that began the book!

After the meeting, Camellion drives back to his hotel. The motion detection transmitters he placed in his room tell him that there are people awaiting his return. The Death Merchant sets off the hotel's fire alarms to create confusion before storming into the hotel room and wasting most of the waiting gunmen. Silvestter and an associate escape out the fire escape, but they leave behind an attache case containing a strange device with many knobs, wires, and a small screen. From the labels on the various knobs - which include Hypothalamic Read-In, Limbic Adjustment, Pons Inset, Thalamic Coordinator, and Aura Pattern & Adjustment - Camellion deduces that the machine can detect a particular person's aura and that this is how they have been able to pinpoint Camellion's exact location. Rosenberger does not explain how the Auraic Transfinder can differentiate Camellion's aura from the hundreds of thousands (millions?) of others in its range (and why did they bring it with them on the attempted hit?), but Camellion nevertheless believes the machine works - and he believes in the existence of auras.

Aura? That's something right out of occultism. The aura is a luminous appearance seen surrounding the human body. I'm convinced it exists and that it's made up of numerous elements of the human forcefield, including perhaps heat radiation, electromagnetic fields, and many other things unknown to modern science.

Camellion first tries to invade Silvestter's mansion near Hyannis on Cape Cod. A CIA boat takes him close and he scuba dives to the shore and makes his move. He manuvers and shoots his way through the fences and patrolling guards and gets into the mansion, only to be pinned down in a room by six armed thugs. Using some grenades and his usual quick thinking, he ices them and escapes. But fires have started and the house is burning down, and Camellion has to get out before he can kill Silvestter.

The Death Merchant then travels to Santa Fe, New Mexico, with the idea of hiding in the Sangre de Dios mountains. I'm not sure why he chooses this location, beyond the fact that there is a CIA station in Santa Fe. Perhaps it is to see if Silvestter's thugs can track his aura (if they have a second machine) across the country. After catching up with an old friend, Norberto Martinez, Camellion sets off into the mountains, making his base of operations in a small cave. Camellion spends 18 days getting a good feel for the layout of the area, while also setting up electronic detection transmitters and burying packs of explosives. On the 19th day, he hears a helicopter, which was sent by Silvestter to fly over the area and draw the Death Merchant's fire, thus revealing his position. Camellion, wisely using a silencer, succeeds in damaging the copter with his trusty Auto Mags, and it crashes.

Silvestter had spent the past three weeks on the west coast hiring a team of 80 gunmen to track and kill Camellion in the mountains. With groups of men advancing, the Death Merchant detonates the buried explosives and nearly all of Silvestter's goons are obliterated. Only 17 men are left. Camellion uses his recently-acquired knowledge of the terrain to help him hide and sneak up on various shooters. He picks them off in groups of two and three. Naturally, he ends up in a martial arts showdown with Silvestter after everyone else has been killed.

Deadly Manhunt is a fairly perfunctory story. It's missing a lot of Rosenberger's usual silliness. The recent volumes have not been nearly as goofy as the early books. Plus, Rosenberger/Camellion have been making references to religion that seem wholly inconsistent with the Death Merchant's supposedly virulent anti-religion stance. In #32, Camellion mentions "the murder of Jesus" early in the book, and someone is described as looking as forlorn as Joseph trying to find a manger. At one point, Camellion thinks, "No man is infallible. Except the Pope!" And Rosenberger writes: "With his back facing Silvestter, Camellion didn't have time to say any Our Fathers."

Finally, Rosenberger has Camellion show an interest in women and sex, something absent from most of the books:

The second part of the surprise was that the agent was not a he. It was a she - an attractive woman of about thirty, with well-rounded curves in just the right places of her off-white pants suit ...

[Camellion] tilted the cup to his mouth, watching her over the rim, wondering how she would look wearing nothing but a wristwatch and a smile. She was crisp, cool, and all business. He had met dozens like her, and everyone of them had been fire and ice in bed - at least those he had bedded down for the night. Or the weekend. Or, occasionally, for the entire week.

If you came up with 100 nouns or adjectives to describe Camellion, I don't think "horndog" would be among them. But we did learn in an earlier volume that the Death Merchant is "a leg man", so maybe he gets a lot of action outside the confines of the books.
Posted by allan at 7:12 AM