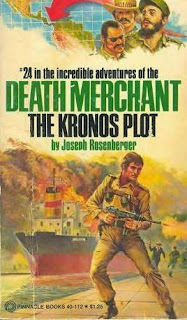 Fidel Castro's latest plot involves blowing up the Panama Canal, by loading explosives onto two container ships and then triggering the explosives when the ships are travelling through the Gatun and Miraflorez locks. The attack is being carried out by FAR (Fuerzas Armadas Rebeldes) for whom Castro has secretly been supplying weapons and tactical advice.

After surviving a shootout while trying to crash a pro-Castro meeting in Key West, Florida, hoping to gain some information about the plot, Richard Camellion - the Death Merchant - heads to Panama City to meet with Trajan Hasbijanian, a heavy-drinking, bar-owning CIA man who fills the DM in on the details.

Camellion then announces his plans to go to a nearby banana plantation to "have a chat" with Captain Alfonzo Gallego, second in command of FAR, aka the Rebel Armed Forces. Everyone says it's a suicide mission. Nevertheless, Camellion disguises himself as an old peasant hoping for some extra work. When he is searched and a gun is found on him, the Death Merchant has to spring into action and lay waste to the plantation. Making his way through the big house and into its wine cellar, he finds Wilfredo Magrinat, the plantation owner, wounded, blinded in the left eye. In short order, Magrinat spills the beans about the plot to Camellion: the attack will take place the day after tomorrow!

Time is obviously running out. The Death Merchant, trying to figure out where the controls for the explosives would be located, starts free-associating, wondering how the plot will likely unfold. He comes up with a theory - pretty much out of nowhere, and based on nothing concrete - that turns out of course to be 100% correct.

After persuading the head of the Panama Canal Zone to allow Camellion and seven others to "invade" the Canal, they travel by helicopter over the nearby jungle. Camellion engages in a firefight in the jungle (including some hand-to-hand combat). Two rebels are taken prisoner and they end up revealing more about the plot. In the end, Camellion, Hasbijanian and a few others storm the ship from which the explosions would be triggered and save the canal.

Joseph Rosenberger is usually extremely stingy about providing any background information about the Death Merchant. However, in The Kronos Plot, we learn quite a bit. Camellion is "a leg man" - and he actually has sex in this book ... but only after making doubly sure that his trusted Lee Jurras-designed Auto Mags are safe. He went to high school in St. Louis (we already knew he taught high school there before becoming (for unstated reasons) the Merchant of Final Oblivion). Also, he never eats breakfast.

Camellion is described as a superman "who could use pistolas with an impossible accuracy and who talked like a philosopher" and someone who combines "the brute force of a prizefighter and the gentle reasoning of a psychoanalyst". ... Camellion is described at one point as being "as calm as an unconscious clam". ... Also, his "peculiar", "icy" blue eyes have at times "a kind of unearthly shimmering". His intense, blue-eyed stare makes people very uncomfortable.

One seemingly hokey invention Camellion's men use is something called a P.F. Analyzer, developed for use in the Vietnam War.

... the "P" standing for perspiration, the "F" meaning feces. Often called the "People Sniffer" or the "B.O. Detector," the P-F-A could detect human beings by identifying minute traces of enzymes found only in human sweat or excrement. For either the air or the ground, the P-F-A had a range of 3.7 miles.

For all I know, the U.S. military really has/had a device like this, but - with its two dials and round radar screen - it seems like some silly magical box seen on a '70s TV show.

Camellion, of course, comes very close to catching a slug or two, but narrowly escapes. Rosenberger is fairly exact in his descriptions: "These latter two [slugs] hissed so close to the Death Merchant's chest that one came within .16 centimeters of hitting the middle button on his shirt." ... Hmmm, wouldn't that still strike him in the middle of his chest?

Also: Someone is riddled with slugs from "nose to naval" (perhaps with all the talk of ships, this typo was inevitable).
Posted by allan at 12:41 PM