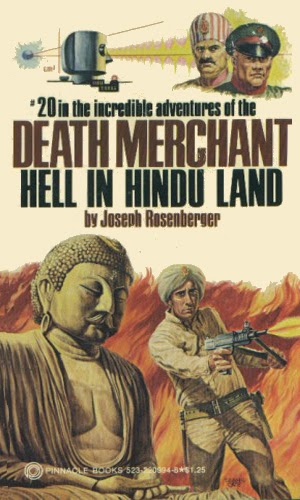 Hell in Hindu Land begins a trilogy that concerns a bunch of alien beings who visited the Earth approximately 10,000 years ago. These Other World Creatures constructed three bases on Earth - one in India, one at the North Pole, and one off the U.S. coast in the general area of the Bermuda Triangle. (With any luck, this is the beginning of author Joseph Rosenberger's high weirdness.)

The CIA has learned through a spy in the KGB that the Russians are planning an expedition to a Buddhist monastery in the mountains of Rajmahal, in northeast India. Supposedly, in this centuries-old monastery is a secret room, "a vault that contain[s] the corpses of a dozen alien astronauts, each body in a glass casket". The room also contains "many scientific secrets" known to the aliens, some of which could be used to create deadly weapons. So the CIA wants to send a expedition to the monastery, get there before the Russians do, and claim the alien secrets for the U.S.

The Death Merchant is tasked with heading up a 15-man expedition party. In addition to possibly having to battle the Russians if the two groups meet, the DM et al. will have to trek through the territories of two murderous jungle tribes: the Sauria Paharias and the Thugs. Also, the monks at the extremely private monastery practice a deadly form of martial arts called "Zen-Kisba". As Rosenberger puts it, the Death Merchant should be prepared for "the unexpected impossible".

Hell in Hindu Land was a bit more complex (everything being relative, of course) than the last few books in the series. Besides being escapist entertainment, Rosenberger's goofiness is a big reason why these adventures are so much fun to read. When the Death Merchant's group meet up with the first group of savages, the natives are overmatched by the expedition's firepower and stand less chance of survival than "a midget trying to drink beer at the wrong end of a bowling alley". I have absolutely no idea what that means. Someone else is shot and looks "as surprised as a man who has just discovered that someone had stolen a Twinkie from his lunch box". Other gems: "as dead as the British Empire", "faster than an Israeli going through Damascus on a pogo stick", "wearing the expression of a man who had just seen a dinosaur", and "This is worse than going to church with dirty socks!"

Each day when the expedition makes camp for the night, Camellion lays out an acoustic radar system (similar to his EID devices), so he will be alerted if anyone approaches the campsite during the night. One night, he is awakened by the noise of the radar and realizes that one member of the expedition is sending a signal of their location, likely to the Russians.

After the Death Merchant's group is ambushed by a group of Russians but comes out on top, we switch perspective over to the group of Russians. It turns out that the "pig farmers" know Camellion is leading the group but they believe he is merely a rancher from Texas and a friend of anthropologist Dr. Gopi Randuhabaya. This makes little sense. Considering the many battles Camellion has fought against the Russians and how many "pig farmers" he has killed, how could any Russian KGB agent or an agency higher-up not know his identity and reputation? It's nuts.

The Death Merchant's party eventually gets to the monastery and battles it out with the monks to reach the secret room. The tales are true: there are 14 aliens in glass caskets. But Camellion and the others don't make much of a fuss about it. In the climatic shoot-out with the Russian group, Camellion is the sole survivor. He takes with him a pale-green book of cuneiform-like writing - a history of the aliens (known as the Sandorians) and why they came to Earth thousands of years ago. Perhaps this book, or its information, makes an appearance in #21, The Pole Star Secret (in which Camellion travels to the aliens' second base at the North Pole).

Rosenberger has had a three-book (and counting) obsession with a gun designer named Lee E. Jurras, who I discovered is a real person and is still alive. Hell in Hindu Land opens with Camellion walking through the airport in Calcutta and spotting Jurras, who was on a hunting expedition. They talk mostly about guns for about four pages.

... two twin Auto Mag pistols, M200/International models. Along with the weapons were boxes of .357 AMP Magnum cartridges and specially designed shoulder holsters to accommodate the seven-shot automatics, which had a 12.5" barrel length. Designed by Lee E. Jurras, the noted ballistician, international handgun hunter, and author, the Auto Mag, which was also manufactured in .41 and .44 calibers, was the most powerful autoloading pistol in the world. (pages 19-20)

Hidden under the burnous, in special shoulder holsters designed by Lee E. Jurras, the Death Merchant carried two Auto Mag autoloading pistols, the long weapons, with their 12.5" barrels, reaching to his hips. (36)

"You'd better believe it!" Camellion shot back. "A good friend of mine, Lee Jurras, the designer of those weapons, gave them to me." (115)

Camellion moved back six feet, pulled one of the .41 JMP Auto Mags from its special Jurras-designed shoulder holster ..." (30)

Unfamiliar with firearms, Griffiths had no way of knowing that he was staring into the muzzle of a .41 JMP custom-built Auto Mag pistol designed by L.E. Jurras, the famed ordnance specialist." (71)

Seeing McAulay's intense interest, the Death Merchant explained that while the "Backpacker" Auto Mags had been designed by L.E. Jurras for those individuals who preferred a smaller version of the A-M system, there were various other kinds of the famed and fabled Auto Mag. (146-47)

As Camellion hurried through the terminal to pick up his baggage, he spotted Lee E. Jurras sitting in one of the lounges - the very same man who had designed and developed his line of Auto Mag Pistols. Almost at the same time, the noted ballistician, pistolsmith, and international handgun hunter looked up and saw Camellion, a look of surprise and pleasure crossing his tanned face. (2)

A moment later the bandit didn't exist; the Death Merchant having put a .41 Jurras Magnum Pistol slug through his stomach ... (48)

Camellion adjusted the focusing knob of the binoculars and recalled what Lee Jurras had said about going into deep brush after a dangerous animal that had been wounded - "believe me, it can be a living nightmare." Richard believed Jurras. It was the same when hunting the most dangerous game of all - MAN! (106)

And - looking ahead - the dedication page to DM #21 (The Pole Star Secret) reads: "Dedicated to Lee E. Jurras - whose Auto Mags have saved my life scores of times. R.J.C."

So a fictional character is providing the dedication for his creator's book? Or is this a meta situation where Camellion is a real person, but is writing the books in the third person under the name Joseph Rosenberger? I've read that Rosenberger envisioned the Death Merchant as a fantasy version of himself - Camellion's middle name is Joseph - so perhaps the lines between author and character are blurring a bit.

I have become more than a little fascinated with Rosenberger after reading all of these books, but there is next-to-nothing about him online.
Posted by allan at 7:38 PM