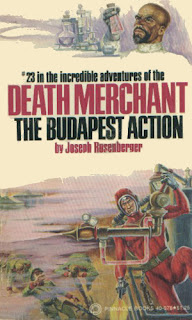 "NK-hk-4, an hallucinatory gas that didn't kill, but kept its victims deranged for as long as two weeks, reducing them to the level of idiots. Colorless, tasteless, and odorless, NK-hk-4's value lay in its power and its worth as a weapon of war. One liter (1.06 quarts) would suffice to immobilize a city the size of New York. The possibilities were more than fantastic: they were mind-boggling. An aircraft could spray the gas over the city. Within a few hours at the most, millions of people would be staggering around like drunks, unable to think, slobbering, crawling on their hands and knees, having lost even their individual identities. The second terrible potential of NK-hk-4 was that it wouldn't damage the hardware of the city attacked. Not a single building would be affected."

The DIA has asked Richard Camellion, the infamous Death Merchant, to obtain the NK-hk-4 formula and destroy the laboratory of Dr. Imre Meleter at Karolyi Castle.

Camellion enters Hungary with a West German passport as Brother Helmut Krim, of the Catholic monastic order of Benedictines. According to his cover story, he has traveled from Cologne and is making the pilgrimage to Shrine of Our Lady of Bakony. The Death Merchant is working with the Society of the Double Cross, an underground outfit in Hungary. The plan is to smuggle various weapons in their vehicles and blend in with the thousands of other people making the pilgrimage. When they get close enough to the castle, they will attack.

With Camellion impersonating a priest, I was all set for a ton of anti-religion comments, but I was disappointed. The Death Merchant keeps his opinions to himself for the most part in this book, although he does discuss good and evil, faith, and miracles with the men of the cloth. Camellion notes: "All men have faith in something ... his field of endeavor is his own personal kingdom of faith."

When Father Csoki says that he is "convinced that demons walk this earth, that Communism is but the prelude to the coming of the Antichrist, to the end of the world", Camellion replies "with his usual perceptiveness" (and sounding like a jumbled encyclopedia entry):

The Jews refer to this figure as Armilus, that is, he's an eschatological figure found in the literature of the Gaonic Period. Other sources - Midrash Va-Yosha, Nistarot de-Rabbi Shimon ben Yohai - call Armulis the successor of Gog and depict him as a monstrosity, who claims to be the Messiah or even God, and is accepted as such by the sons of Esau, but is rejected by the Jews. In the ensuing struggle the Ephraimite Messiah and a million Jews are killed, but Armulis is destroyed by God or the Davidic Messiah. The composite Armulis legend appears to have been influenced by older concepts such as Ezekiel's Gog and Magog, the Persian Ahura-Mazda, and Ahriman. It all forms part of the eschatological aggadah that visualizes the messianic era as the ultimate victory of the forces of good, represented by the Messiah, over the power of evil.

Then he starts talking about how the Antichrist "just might be the weather". According to Camellion, "wars, revolutions, economic depressions, even tastes in art and musical expression" can be predicted by five-hundred year weather cycles throughout history. There will be "a heat climax" around 2040 after which "glaciers will begin to advance again" until a cold climax is reached around 2500.

Elsewhere, Camellion restates his thoughts on life and death, telling one priest:

Father, the entire purpose of life is to reach death. As a man of God, you should know that birth and death and joined together by life, by a short period of time. So the only reason for our existence must be to prove that time exists. One might say that the only positive thing we discover in life is that time is eternal. The irony is, though, that in eternity time doesn't exist. It's all the forever now.

As always, there are plenty of Rosenberger's unique turns of phrase:

"looked as startled as a snake with a sudden backache"