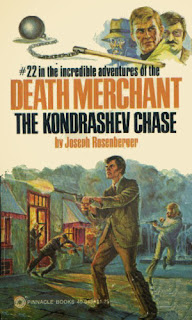 If this is the third book in the trilogy that includes Hell in Hindu Land and The Pole Star Secret, Joseph Rosenberger has dropped the alien subplot completely. In #22, he has Richard "Death Merchant" Camellion travelling to (or being smuggled into) East Berlin and Czechoslovakia to locate a missing Russian colonel who had been a double agent, feeding information to the CIA.

Colonel Vladimir Boris Kondrashev disappeared with a lot of valuable information: the names of KGB agents and their contacts in Europe, the U.S. and South America. He is trying to get to the West, but many governments in Europe would love to get their hands on him (and his info). It's up to Camellion to find Kondrashev and then ferry him safely to the U.S.

Camellion teams up with a group of ex-SS members called Silent Help, a group supported by the CIA. This story is pretty dull, with a minimum of action. Rosenberger spends far too much time with descriptions of towns, extended conversations about what to do, and details of how Camellion and the Silent Help people get from place to place. There are a few shootouts, including a climatic scene in which Camellion, Kondrashev, and two others hijack a Russian T-62 tank at the famed border crossing known as "Checkpoint Charlie" and, after blowing away scores of Germans, head across the bridge to safety.

With the bare limit of shootouts, Rosenberger's gift for describing each bullet's trajectory and the damage done is seriously curtailed. And instead of simply using the word "slug" all the time, he's now often using "projectile", which doesn't work as well, especially in the middle of a tense shootout.  Plus, "slug" sounds exactly like what it is.

The Kondrashev Chase is dedicated to "the Cosmic Lord of Death", who is also mentioned several times in the text by the Death Merchant. The book begins with a epigraph from none other than R.J. Camellion:

Tyranny often establishes itself by choosing first an unpopular victim or by pleading that massive invasion of privacy is necessary. No matter the form of government. Call it a republic. Refer to it as a democracy. Call it socialism or communism. But make no mistake about it, Victim: the name of the game is power ...

At one point, the Death Merchant is hiding out in the basement of an East German church. One of the priests mentions his joy at being able to "strike a blow for God against the Satanic forces of atheistic Communism". Camellion is "too tired to argue with the hypocritical priest" and merely nods ... and then Rosenberger continues with half a page of what Camellion would have said had he bothered to reply to the priest!

Over the centuries, organized religion had done its diabolical work in stealing the wills of the weak-minded and in making moral slaves of millions by threats of eternal damnation. In the Western world, where the Church was supreme, there was always oppression for the "moral good" of the people. For example, there was no divorce in Spain. The sale of contraceptives was also forbidden in Spain, as well as in Italy and in Ireland. Ireland was also afflicted with the disease of censorship of the press: anything that Church authorities disapproved of could not be printed, spoken over the air or put on television. All of it was nothing more than a dictatorship of the priesthood - And why not? The citizens of the Pope's kingdom are morons who believe in a man-made god!

Camellion's ill-timed love of fruit juice makes a strong comeback! In many of the early volumes, during a shootout or when Camellion is otherwise pinned down, he often would express a desire for a cold glass of fruit or vegetable juice. In this book, he wishes for pineapple juice twice and grape juice once.

Kondrashev mentions that Russia's Special Services Two has a "very thick" file on Camellion. In some of the previous DM books, Rosenberger has had various KGB agents and officers express confusion and ignorance about who Camellion is and/or who the "mysterious" Death Merchant is. It's as if Rosenberger cannot decide if Camellion is widely known throughout the world's spy network/underground or is more of an enigma.

As usual, Rosenberger sneaks in his political opinions, or rather - since he does it without any subtlety whatsoever - dumps his beliefs in the middle of the room. One character details how the United States has assisted (and refused to deport) certain German war criminals. And it falls to Knodrashev to voice this book's indictment of the U.S. as a nation that benefits only the rich:

In America, it is the tax loopholes who protect the rich. It's the working man who pays the taxes. Do you realize that since the end of World War II, your government has paid out about two hundred and twenty-one billion dollars in foreign aid; yet there are hungry people in the United States. In many respects, Death Merchant, your people in Washington are no better than mine in the Kremlin.

And Camellion delivers a mini-rant against religion (with a strange twist):

If a Christian god existed, we wouldn't have world hunger and daytime television. Religion is nothing more than the invention of the people of the future for the control of humanity's present. The Dark Ages represent a thousand years of religious repression of inquiry, a period that was forced on us by malicious time travelers, who have been with us even before Biblical times.