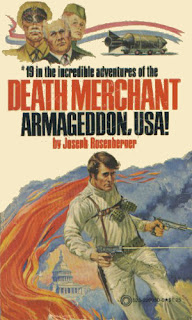 It's only a few weeks since his adventure in Algeria, and Richard Camellion (aka the Death Merchant) is in Missouri, attempting to break into the seemingly impenetrable compound of the Sons & Daughters of the Stars and Stripes, a right-wing organization funded by pharmaceutical millionaire Harrison Garfield Motts and dedicated to overthrowing the U.S. government.

Camellion is also worried about a shadowy group calling itself the George Washington Brigade, which is demanding the president and vice-president resign - with a GWB member taking control of the US - or it will set off atomic bombs in three American cities. The group has already exploded an A-bomb deep in the Gulf of Mexico to demonstrate its seriousness.

Armageddon, USA! (published in November 1976, the sixth DM book published that year) is somewhat different in that early in the story Camellion runs down two dead ends in which he gains no valuable intel or makes any headway in the case. He first goes to the SDSS building disguised in a beard and shoulder-length blond hair ("both as false as the Communist Manifesto"). He pole vaults over the eight-foot high barbed-wire fencing in the rain and blasts his way in. However, Camellion is unable to get any information on the A-bomb locations because a code is needed to open the safe in which the info is likely kept. (Wouldn't he have realized any safe would be locked before attacking?) Then the Death Merchant and a CIA agent try to reach Motts's mansion but come under heavy gunfire while on the estate and have to retreat.

It turns out that SDSS is indeed behind the bomb threats, but it's by pure chance that the group was singled out by the US Government out of hundreds of fanatical and/or possibly terrorist groups. So why was the FBI suspicious of SDSS? Because the group doesn't do much of anything - its members take some target practice at their main building and criticize the government in their newsletter - so Camellion and others assume they might be simply laying low and planning something big!

Eventually, Camellion et al. kidnap one of Motts's executives and threaten him (1984-style) with snakes, and he blabs about everything. Once again, our heroes are on the water (Puget Sound) and like two other DM books (#s 8 and 15), Camellion has his boat move up alongside the other one so he can leap aboard the enemy vessel and attack. This time, there are only four goons to deal with.

In the end, the locations of the bombs are learned and they are dismantled. Everyone is glad the threat has passed, but Camellion, in his usual Mr. Know-It-All tone, reminds them that this is only "round one".

[E]ven now the American people are sitting squarely on a nuclear time-bomb. At the present time there are sixty nuclear plants operating in the United States. Each plant produces several hundred pounds of plutonium yearly, along with the same amount of enriched uranium. Yet as far back as 1971 the Atomic Energy Commission admitted that one percent of its plutonium was missing; and only a few months ago the Nuclear Materials Enrichment Corporation said it could not account for  percent of the fissonable materials it handled over a six-year period. All of this amounts to thousands of pounds of nuclear materials, enough to make hundreds of bombs. Sooner or later, another nut group will come along and make itself a thermonuclear bomb, and we'll have to go through the same hunt-and-find business all over again.

In at least two previous books, Rosenberger mentioned that Camellion (about whom we have little biographical information) grew up in St. Louis. And yet, in Armageddon, USA!, even though Camellion sets up his base of operations in St. Louis - the SDSS compound is located outside the city - Rosenberger never mentions that Camellion has returned to his home town. It's truly bizarre. Did Rosenberger simply forget? (The narrator does note that St. Louis "had become a jungle" thanks to various Supreme Court cases that had delivered the city into the hands of "two-legged scum" and other types of "human garbage".)

The Death Merchant dropped the C.O.P. into his pocket and reloaded his twin Auto Mags. This was the first time he had used the tiny C.O.P. and was pleased with the smooth operation of the weapon which had been designed around the century old pepperbox style multi-barrel concept. Of all steel construction and boasting double action lockwork, the Compact-Off-duty Police weapon was only 5 1/2 inches long and weighed only 25 ounces. The gun had four barrels and "broke open" like an old-fashioned revolver, this tip-up being accomplished by first unlatching the spring-loaded locking lug. As the barrels were manually tipped up, an automatic extractor lifted hulls or loaded rounds far enough out of the chambers for easy withdrawal.

The trigger was double-action only Each time the trigger was pulled it cammed the striker assembly 90 degrees to line up on and strike one of the four firing pins in a clockwise sequence. The system was very dependable. Should a misfire occur, the shooter simply pulled the trigger again to line up a fresh cartridge in the next chamber. The striker assembly was always locked in the rebound position until the trigger reached its rearmost point of travel. Yeah, the C.O.P. was a very damn good hide-away gun.

And then it's right back to the action! During one gun fight, we learn a little bit about anatomy, as one slug "cut[s] through the long saphenous vein" and another bullet "lodged in the Quadratus femoris muscle".

In addition to Camellion's usual anti-religion rants, a CIA associate, George McAulay, gets several pages to vent about Catholics, abortion, and income inequality in the U.S. When another agent notes that "there aren't any religious wars in the U.S.", McAulay goes off:

The antiabortion people, that small but loud-mouthed group of morons who want to take away women's rights - that's who I'm talking about. Since Roman Catholic groups are leading the fight for the antiabortion amendment to the Constitution, I say it's nothing more than a Catholic attempt to enshrine its own religious doctrine in the Constitution, where it would be safe from attack even from the U.S. Supreme Court. ... Catholics have a right to their beliefs, just like any other religious group, but they don't have a right to force their beliefs on the rest of the United States.

And later in the conversation:

Let's take the two sanctimonious candidates running for president! What kind of program does either one offer for old people? Have you heard either candidate go into detail about some kind of National Health Insurance, or making the rich pay their fair share of taxes. You haven't, and you won't, because this is a rich man's country; and anyone who votes for either idiot is a damn fool, because it doesn't really make any difference who's president. It's the rich who run and control the U.S., and no matter who the president is, the poor will always become poorer and the rich will always get richer.

The evil Motts is also anti-Catholic. At one point, he rattles off a series of bullet points, showing how the U.S. government wastes millions of taxpayers dollars. And like the DM, he's not all that keen on Israel, either.

All of this is fairly interesting to read in this type of book, even though the conversations spring up out of nowhere and come off as incredibly stilted. It makes me very curious about Rosenberger, who I had read was pretty conservative. Camellion and the other characters state these opinions as facts - and there have been negative comments about Nixon and the Vietnam War in several DM books - and Rosenberger doesn't have anyone refute them, or even argue against them all that much.
Posted by allan at 6:44 AM