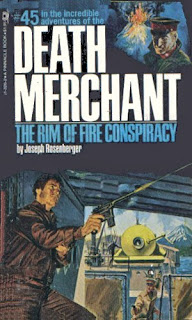 In The Rim Of Fire Conspiracy, Joseph Rosenberger reworks the plot of The Bermuda Triangle Action (DM #37), in which the Russians attempt to plant hydrogen bombs in the fault lines off the Atlantic coast, hoping to cause unimagined destruction to the southern and eastern United States.

This time, the "pig farmers" are drilling deep into the various fault lines off the west coast. Indeed, the U.S. determines that the May 1980 eruption of Mount St. Helens was likely caused by the testing of a Russian nuclear device buried nine miles deep in the Earth, along the Pacific Plate. Future (and more powerful) explosions could trigger hundreds of now-dormant volcanoes along the Cascade Range, a stretch of 700 miles from British Columbia to northern California (referred to here as the Rim of Fire).

When Rosenberger switches to the Russian POV, we learn how the Soviets are digging the holes (with a laser) and planting the devices.

At the CIA's main station in Los Angeles, Richard Camellion is in a meeting during which a lot of information about Plate Tectonics Theory, volcanoes, and earthquakes is being discussed. Camellion asks several questions, specifically, what if multiple hydrogen bombs were buried deep in fracture zones and detonated (i.e., exactly what it turns out the Russians are planning to do)?

Through an unbelievable coincidence, the U.S. discovers a KGB agent in an Anchorage, Alaska, drug store. It turns out there is a KGB cell in the town, possibly monitoring the seismic waves from the various Soviet bomb tests. Camellion and a team of commandos head to Anchorage and invade a hotel run by Harry and Sally Bella, who are hiding the Russians (disguised as a group of British businessmen looking to buy some land).

After the raid on the hotel, someone notes that Sally Bella was injured. (This is a good example of how Rosenberger's personal opinions (I assume) get inserted into the narrative.)

"What about the woman?"

"Oh, she's all right. She has a swollen jaw, but it's not broken. She's mumbling about 'suing' us for 'invasion of privacy'! Have you ever heard anything more silly and ridiculous?"

"Yes, I have," Camellion snickered. "Like, Lee Harvey Oswald shot John F. Kennedy or that 'Deep Throat' in Watergate was a 'patriotic citizen' only doing his duty for 'the nation,'" He became serious. "We'll have a doctor check them at Elmandorf [Air Force Base] before we take off for California."

On the next page, the Death Merchant reveals that Deep Throat "was actually a KGB mole, a money-loving son-of-a-bitch that the Company managed to turn around".

After the Alaskan hotel raid, Camellion is on a nuclear sub, the Albatross. Questioning the captured Russians gives the U.S. information about two Soviet bases, one in Roca Oneal, in the Revillagigedo islands, and another in San Cristobal, one of the Galapagos islands. The Roca Oneal base is attacked and destroyed by a separate military group, so it's up to Camellion and 150 others to storm the San Cristobal island base and destroy it.

Three days after that mission, they are on another sub on their way to invade the top submarine in the Russian fleet, the Aleksandr Pushkin. After five helicopters riddle the sub with shells, the Death Merchant and the other men rappel down onto the sub and blast their way in. (I'm not sure why the Russian sub did not simply dive down into the ocean when it heard the copters approaching rather than stay on the surface and get shelled. Or perhaps wait until the men were on top of the sub, and then submerge.) A huge storm is on its way so the DM and his force have to make their way down four levels to the laser room in the very bottom of the vessel, destroy the laser, and get back up to the hovering copters before the weather gets too rough.

There is fierce fighting on the sub, of course, with both sides finally coming "eyeball to eyeball" in the close quarters. "What made the difference was attitude. The United States is a nation of freedom. In contrast, the Soviet Union is a nation of sheep."

In the early volumes of the series - written in the mid-70s - Rosenberger had Camellion make numerous insults about Richard Nixon. Now, in 1981, Nixon's criminal activities are apparently a-okay with the Death Merchant. Working under the name Alex Preston, Camellion is given papers listing his address as 143 East 65th Street in Manhattan. He muses to himself: "Only a block from where Richard Nixon lives. I'm in good company. Nixon didn't do anything that other Presidents didn't do. He just got caught at it."

As usual, it's the Carter administration that the Death Merchant cannot stand: "peanut minds from Foggy Bottom" led by a "Bible-quoting idiot", and "jackass fools who don't even know we already have another Pearl Harbor in the Caribbean". (I don't know to what event(s) this refers.) There is a reference in the next DM book to ex-President Carter, so we'll soon see how Rosenberger feels about Ronald Reagan.

We are told that Camellion is a necessary force in an evil world. "The man was a machine ... But the way to the Holy Grail of Freedom was filled with such men ... men fighting to keep the United States free of communist domination." ... One Navy man on the sub admits his dislike of CIA agents like 'Preston'. "But I suppose we need such people to keep the nation safe."

We also learn that Camellion hates CIA Executive Officer Fred DeRose because "he had heard DeRose mention to another officer that he enjoyed going to Tijuana to watch dog fights. To Camellion's way of thinking, any man (or woman) who enjoyed watching pitbulls tear at each other with their fangs was a no-good ten times over, on level with lice who beat children or battered their wives." ... The Death Merchant is also suspicious of DeRose's personality because he has long fingers; however, no further explanation is given.

Camellion actually comments at one point: "I dislike violence of any kind ..." (!!!) It doesn't appear to be a joke. Obviously, it's more than a little strange to have this coming from Camellion, who has killed thousands of people and has no compunction about killing innocent people if they happen to be in the wrong place at the wrong time and need to be "removed" so he can complete his mission without messy complications.

Even more amusing is that after someone refers to some "spic commies", Camellion considers letting the bigoted description slide by, chalking it up to "the worldwide disease of racism", but he decides he must confront the speaker, because "racism was the hallmark of a fool". However, Camellion is interrupted before he can speak out. (Of course, in every other book, Camellion himself uses similarly racist terms.)

"At the same time, [Harry Della] attempted to pull a .38 Charter Arms revolver from his right rear pocket. He might as well have eaten a pound of navy beans and have attempted to fart his way across the Pacific."

"As far as the CIA agent was concerned, it was Graham Cracker Day and Mogatovski was the big crumb."

"[Camellion's] left leg shot out and he employed a Kogan Geri top of the foot slam that landed directly where he wanted it to land - between Sergei Piriev's legs, the instep wrecking the Russian's sexual apparatus, crushing his testicles the way a power press would squeeze together two oranges."

"Surprisingly, Colonel Havilland sounded as calm as a sleeping oyster."

"Crap and cream puffs." (This faux obscenity is actually uttered three times!)
Posted by allan at 5:19 AM