Death Merchant #44: Island Of The Damned 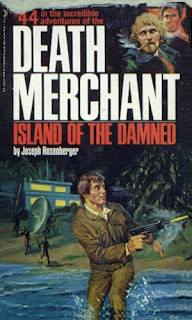 The premise of Island of the Damned makes absolutely no sense.

Yuri Mkrtchyan, a Russian doctor studying DNA, has an hypothesis that the genes in every human being "carr[y] the memories of the hundreds and hundreds of millions who had lived and were now dead".

He is working on a Bio-Memory Scanner, a machine that would be able to unlock this massive amount of information supposedly stored in a person's DNA, giving a person access to the emotions, thoughts and memories of the countless philosophers, musicians, writers, statesmen, and ordinary people that have ever lived. However, in the few tests the Russians have performed, the data overload has simply driven people insane.

Now, how can the emotions and memories of someone on the other side of the world can be encoded into my DNA? This possibility is explained a bit more at the end of the book, once the Death Merchant has destroyed the Russian lab.

According to some theoreticians, the activity of thought extended beyond the physical body and partook of a "field of mind" surrounding the planet and extending into space for . . . how far? This mind field was composed of the collective experience of the human race: our thoughts, our feelings, our actions.

"All these trillions of thoughts exist in one vast thought field," Camellion said, "the equivalent of what Carl Jung called an archetype experience. The totality of this thought field, or archetype, constitutes an 'atmosphere' of thought energy coextensive with the earth's physical atmosphere and beyond."

Whatever. It's ridiculous any way you slice it. (And the fact that I'm criticizing a Death Merchant book because it's not believable is equally ridiculous!)

But, anyway, the Russians are working on the Bio-Memory Scanner in a secret laboratory in a mountain cave on a privately-owned Hawaiian island called Tukoatu. The island is owned by a Japanese billionaire and the Russians are blackmailing him into being allowed to do their scientific work on his island. Why the Russians have invested so much time and money constructing this lab on American soil is somewhat unclear.

The Americans have detected "faint wave ducts" from "wave-form amplitude distortion" and believe that the Soviets have set up a base somewhere and are trying to monitor U.S. satellites. (The U.S. rules out the Chinese as possible perps because they don't have the necessary technology). The U.S. has been searching for this mysterious base for three months. In a secret meeting, Camellion throws out the suggestion that the base might be a mountaintop "on some privately owned island". What a guess!!!

Earlier, Camellion was ambushed after meeting with a contact in Honolulu and one of the gunmen was allegedly a strong arm for the Renton mob. The Death Merchant decides to storm Archie "The Owl" Renton's beachfront property, kidnap him and question him for possible info. Renton offers very little, but then, almost as an afterthought, he says, "something's not right on the island of Tukoatu". The owner of the island recently fired four employees and even though one of them had stolen $75,000 in artifacts from the house, Nagai never reported the theft. Camellion wonders if the two events are connected. (Of course, they are.)

After six TE-15 Eagles fire two dozen air-to-surface missiles at the underwater cave that serves as one entrance to the secret Russian lab and then demolish the house ("a downpour of steel death"), the Death Merchant's team drop in to the island house via copter - and after an epic shootout, emerge victorious.

Rosenberger's description of the Bio-Memory Scanner is pretty lame: "a large contraption that resembled something from a Grade B science-fiction movie. ... There were enormous coils and circuit breakers, and a long control panel filled with dials, knobs, switches, and rows of multicolored lights."

DM Factoids: Camellion has light-sensitive eyes and is "by temperament and biorhythmically a night person". He has a 36-inch waist. He eats fried SPAM. He is described as "a fatalist who was neither in awe of God nor afraid of the Devil, a dispassionate pragmatist who could realize that there were situations which only a Final Solution could solve."

We also get a description of our hero: "a lean, tough-muscled man with a firm jaw, off-blue eyes, and a brown crewcut. Looking at him, the two [FBI] agents were reminded of George Peppard, the motion picture actor". (At the time of the book's publication (April 1981), Peppard had yet to star in the TV series, The A-Team. That show began in 1983.)

Camnellion also remains prone to breaking off into political or social thoughts at any time. At one point, he outlines the many germ warfare programs being conducted by various nations:

And fools worry about nuclear warfare!

There were problems. Already certain concerned people in the United States were stirring up a stink about the U.S. Government's germ warfare and nerve gas program.

It's unfortunate. Peace-loving men and idealists have always been naive fools who will never learn that peace can only come through strength of the military. . . . And wait and see the result when the public learns that UFOs are top secret U.S. military craft, begun by the Nazis and perfected after the war by German and American scientists. Or if the American public ever learns that cattle mutilations are the result of nerve gas experiments. But so far the public have been fools. The Company's "disinformation" people have seen to that. Damned clever, too. By cutting out the tongues and sex organs of the cattle, the technicians have made the public believe that the mutilations are the work of cults, devil worshippers and other kooks . . .

One of Camellion's aliases in this book is "Albert Cosgrove" although at one point, he is referred to as "Osgood". There were more than the usual amount of typos in this book, including one that had the Russians drinking "yodka".

"Bazzziittttttt. Three 9mm round-nosed slugs zipped through Sherill's left clavicle, shot perpendicularly through his left lung, tore through the end of his liver and the upper portion of his stomach, bored through a section of the taenia coli and came to a bloody, skidding halt in the satorius muscle of his left leg."

"An amateur would have died without knowing how he had been killed, but Camellion could spot approaching death when he was asleep!"
"Such an installation would stand out like a twelve-inch erection on a midget!"

"Grinning from ear to ear, Krestell was as excited as a ghetto child getting off the bus at summer camp. 'Hot diddle damn!'"

"What was really needed inside the building was automatic shotguns. But no! None were available in Honolulu. Washington was on another "let's-all-save-money" binge as the dear, dumb liberals (who would soon be dear, dumb, and dead liberals) pretended that a world of mega-death didn't exist."

"... one ivan had such a long nose that his mother must have been an anteater!"

"One explosion tore mutter-mouth's head from his shoulders and sent it rolling west like a bloody bowling ball."

"A bedbug in a test tube couldn't get out of that cave."

As Grojean and Camellion talk in the epilogue, the CIA chief shows the Death Merchant an 8x10 photograph and asks, "Do you know him?" Camellion says, "Sure, he's that ding-a-ling the press calls The Penetrator. I hear he's very intelligent and has a lot of savvy." Then they change the subject. (The Penetrator was an action-adventure series written by Mark Roberts and Chet Cunningham under the name Lionel Derrick.)
Posted by allan at 6:31 AM