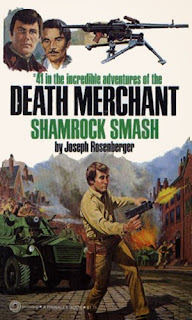 Someone - or some country - is supplying the IRA with all sorts of weaponry and it's up to Richard Camellion (the Death Merchant) to find out who.

Joseph Rosenberger goes into a huge amount of detail about the political/religious situation in Ireland circa 1980 (when this book was written and published). At one point, Camellion is driven around South Belfast in an armoured car with a military official who provides a running commentary/guided tour. (The official also refers to "a certain well-known Irish-American U.S. senator" as a "gasbag", although Rosenberger does not identify Ted Kennedy for another 11 pages. Much later in the book, Rosenberger notes a Death Merchant-led rocket barrage causes the the IRA's "spirits to sink faster than Ted Kennedy's car off Dyke Bridge". Rosenberger also makes a Chappaquiddick wisecrack in the next book, #42.)

The Death Merchant's goal in Shamrock Smash is to get Keenan McGuire, the IRA leader, who is expecting delivery of a big weapon. Camellion and CIA agent Chris McLoughlin first meet with Liam O'Connor, who poses as a diehard Protestant but is feeding info to the British SIS. Through O'Connor they learn about an important Provo base to the north: Lha-Beul-tinne Castle.

So - in what is becoming a serious cliche in this series - Camellion and a British fighting force go off to storm the castle. But McGuire is not there. Through some amazing deductions, Camellion figures out that McGuire - now in possession of a small atomic weapon that was delivered by a Russian submarine - can only escape to the northeast. He takes a wild guess that the only place to hide out is Teamhair na Riogh, "an ancient pagan site [abandoned in 1021] that was supposed to have belonged to the druids". You'd think this might be an historical site, but apparently not, as Camellion orders a helicopter to shell both ends of the large mound with heavy artillery before he and his force of 13 men race inside. McGuire and five others are captured. Facing execution, one of the prisoners blurts out the location of the bomb.

Camellion is extremely sadistic in this book. On two separate occasions, when questioning prisoners/captives and not getting immediate answers, he simply shoots the uncooperating captive dead. In one case, he ties an IRA guy to a pillar and stuffs an L-flare in his waistband. The guy basically burns to death in front of everyone else, as Rosenberger notes the sickening smell of charred flesh, etc. Camellion is not usually so ruthless.

At several points, Camellion is described as something other than human, presumably living on some higher plane. Working under the name Ringgall, Camellion "seemed to have a mystical covenant with death". And as usual, a character "detected a strangeness about Ringgall, an eerie quality he couldn't quite put his finger on, yet the weirdness was there, and it was frightening".

Towards the end, during the final firefight, a thought floats through Camellion's mind:

Silly humans, with their "if only" kind of mortality. It was the fomes peccati of the Latins and the yetzer-ha-ra of the Hebrews. Camellion laughed to himself. Be as gods knowing good and evil, so says the myth. But it forgot to add: capable only of evil when man is left to himself.

In talking about old age, Camellion hints that he knows when he will die:

"It's the same with old folks the world over," Camellion said, thankful that he would never experience the miseries of old age. "It's that constant sense of being superfluous, of being useless, that causes so much depression in the frigid years of life - that and the solitude."

"The young also become depressed," McLoughlin said, "and kill themselves."

Camellion agreed with a nod of his head. "Yes, but generally speaking the young can bear solitude better than the old because passion occupied their thoughts. For the elderly, ailments and anxieties have replaced passions as the only avenue of escape from the melancholy that usually accompanies a retrospective cast of mind."

"[Camellion] lay there on his stomach, listening to slugs cut the air several feet above his head, and feeling sorry for the young paratroopers and for Ford, Grimes, and Lieutenant Merriweather. They were all so terrified of death, none of them realizing that it was this "life" that was the only real "death". Once a person learns that life is the transitory illusion - no matter how real it appears during its duration - then he has mastered dying ..."

"Death is not darkness, but light, liberation, and freedom."

"In his own personal philosophy, existing in a three-dimensional continuum (four when one considers time) in a flesh-and-blood-and-bone body was definitely a horse-and-buggy was to travel through the universe."

In a bizarre (and completely superfluous scene), the men witness an apparition, dressed in clothes from the 1700s, descend a partially destroyed staircase, floating on air when coming to the missing steps. He cross the room and disappears through a wall. The men are shocked at this sight, but Camellion matter-of-factly explains what just happened: "We're seeing a memory pattern. ... It all has to do with time and the brain. ... It existed outside of space and time, outside of our time and our space, both of which are relative in our continuum."

At one point, Camellion muses:

A realist knows that every human being is born alone and dies alone. So he never loves anyone or lets anyone love him. He remains an observer, but never becomes one of the observed. ...

Only wise men seek the truth, just as wise men never seek to return to the past and take the risk of excavating forgotten pain while looking for remembered happiness.

Rosenberger has not (to date) provided an origin story for Camellion. We have received no hints about why Camellion does this dangerous work. There has been no mention of a former girlfriend or wife, but it almost sounds like at one time Camellion experienced happiness, but it ended, putting him on the lonely road he now travels, never looking back.

"Seven of the Provos couldn't have asked for more trouble if they had tried to smoke sticks of dynamite for cigars."

"The Irish idiot in the truck ... was attempting to lean around the side of the cab and get a Soviet PPsh41 submachine gun into action, but he didn't even get off to a good start. His head and chest exploded as if a grenade had gone off inside his torso, blood, rib bones, chunks of heart and lungs flying into the spring wind."

"The Provo next to the woman was dusted next, three charges of .24 caliber shot popping him in the left side of his head and shoulder. Head, neck, and shoulder exploded into a pulpy mass of flesh, blood, and bone, his Adam's apple jumping out of his torn-apart throat and hitting the inside of the metal windshield like a bloody ping-pong ball."

"The Death Merchant made up Shannon's mind for him. He used the last bullet in his left auto mag to explode Shannon's head and send blobs of his think machine rocketing in all directions."

"Both more enraged than a hornet with the hiccups, Camellion and McLoughlin fired with precision, never wasting ammo."

"A long, long time ago, he had learned that it was always unrealistic to fight evil with goodness. The trouble with goodness was that it went to bed every night and slept soundly. Evil was an insomniac, forever awake, forever active."

The Death Merchant almost never curses. "Tiger turds!" he exclaims at one point.

The British troops conform to stereotype, saying things like "old chap", "jolly good", "by jove" and "Dash it all, man!", and they beginning sentences with "I say, ...". A general with a Cockney accent remarks, "We'll give them blokes 'ell, we will." Once the fighting is complete, he sums up: "We got them all, we did."
Posted by allan at 7:59 PM