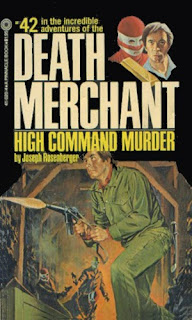 The set-up: Towards the end of World War II, a group of American soldiers under General Patton's command stole 100 crates of Nazi gold bars and, with the assistance of members of the French resistance, hid the gold in an abandoned mine shaft in northern France.

The Nazi treasure has been hidden for nearly 40 years, but information about its existence recently came to light thanks to an interview by one of the Frenchmen. He was soon found dead. Now several groups of French terrorists, an association of ex-SS men, and the CIA are in a frantic race to find the gold, now worth upwards of $500 million.

But even before the story begins, we get a unique dedication from author Joseph Rosenberger: "To the best friend humanity will ever have - the Cosmic Lord of Death." (Also, Pinnacle changed to a different (and less appealing, to me, at least) cover layout with High Command Murder, published in December 1980. Dean Cate is still doing the artwork.)

Richard Camellion begins his work in Paris, meeting with members of the ARC (Action pour la Renaissance de la Corse). The CIA says they will pay the ARC $5 million for its assistance in finding the gold, and the group believes it has discovered another man who helped hide the gold and that he may be willing to talk. Camellion is forced to work what he terms a terrorist organization because the other group looking for the gold is Odessa, a group of ex-Nazis who have thrown in with the FLB, who are also trying to find any Frenchmen who assisted the American gold thieves).

Before that, though, the Death Merchant has to fight his way out of a gunfight at a safe house in Montmartre. (Rosenberger provides nice descriptions of both Saint-Villeneuve and Montmartre.) After escaping the mayhem, they drive to Place de la Concorde and meet three ARC members, who they take to another Parisian safe house. Their next move is a long drive to Lamballe to meet the top leaders of the ARC. (The town is frequently misspelled Laballe in the book.)

The 250+-mile drive - which for some reason is spread out over two whole days - gives Rosenberger the opportunity to have the eight passengers engage in wide-ranging political discussions, always voicing right-wing opinions. The narrator - speaking from Camellion's point of view - notes:

[T]here is an international group of power brokers working toward a one-world government.

The evidence was all there, particularly in the new patterns in political corruption and subversion affecting the United States and its Western allies. Bribery of elected and appointed government officials with money, gifts and sex had long been a staple of American political life. A sizable minority had been for sale to the highest bidder, as proved by the FBI's ABSCAM operation. In the past that bidder had been American-based corporations, labor unions, wealthy families and other well-heeled groups with interests to serve and money to spend.

Camellion's face became hard, ruthless. But now, the rise of international corporations has led to a situation where American politicians are now being bought to protect interests that are outside the U.S. and are seldom compatible with the voters. Analyses of political trends show that multinational corporations operating at the level of the Trilateral commission believe national governments are obsolete and cannot be trusted to create a stable world order. This loose international group, based in the USA, Europe and Japan, will attempt to handpick all party candidates for president, prime minister, etc. - Dummies who can be manipulated toward international ends. While the taxpayer is still saddled with the enormous expense of a feeble bureaucracy, every attempt will be made to condition the voter that the government is powerless to act decisively. This will preserve cushy political jobs and ensure support from those in office. What a setup! The present coalition of blacks, women, homosexuals, and all the rest of the minority crap is over fifty percent, and will keep this disaster going for years. Only at the ballot box can this trend be reversed. But it won't. The average voter is too damned stupid to realize that all current officeholders should be voted out, regardless of party.

Personally, the Death Merchant didn't give a damn. In his opinion, the whole human race was just one big pack of savages - Too bad a cosmic Hitler can't wipe out all three billion of them.

So even though Camellion's face turns hard and ruthless as he ponders these thoughts, he actually doesn't care at all? That seems odd. And the ballot box is supposedly the answer, yet the people running for election are being handpicked by the international ruling group, which would seem to make voting irrelevant, so ...

Then, two pages later, after someone refers to the French people as "a bunch of lice" that couldn't hang onto Vietnam, Camellion (who is using the alias Leonard Kidd) notes: "We didn't do so well in Vietnam ourselves."

Jordan glanced at the Death Merchant and grinned. The dour Gerstung [a CIA agent] was not amused. "Remind me to laugh in the year 2000," he growled. "We lost in 'Nam for the same reason we're losing everywhere else in the world. Because of the greedy politicians, the moronic do-gooders and the half-witted unrealists who refuse to see the handwriting on the wall. Screw the American government. It's composed of idiots, traitors, gun-grabbing hypocrites and first-class swine. Fuck the American government ten times over." ...

[Jordan pipes in:] "Did you know that there are more than fifty Soviet-backed 'front' committees operating in Washington? And the majority are located on the one hundred block of Maryland Avenue in Capitol Hill. Most are funded from U.S. taxpayers' dollars through 'study grants' procured by witting and unwitting dupes in Congress. Systematically, their propaganda and lobby efforts - and many of these organizations are allied with the anti-gun groups and would dearly love to see all of America totally disarmed - attack the FBI and the Company for 'civil-rights violations and invasions.'"

Gerstung, who had just taken a slug of wine, belched loudly. "I'll tell you something, Kidd. If you think we in the Company have it rough, you should see what those poor bastards in the FBI have to contend with. The commie front people scream like hell about 'civil-rights violations' every time a poor fed questions one of the slime balls about a federal crime; then the media picks it up and the feds get another black eye." ...

The realistic Death Merchant, who couldn't have cared less about American sheep and their Judas shepherds in D.C., changed the subject ....

Again, the Death Merchant supposedly cannot be bothered with these thoughts. However, in most other books, he often leads these types of discussions.

After having fought an ambush along the way, the group reaches their destination. The ARC states that it knows one of the men who helped hide the gold, a man named Philippe Castile. The location is deep in an abandoned mine shaft near Saint-Brieuc. (As it turns out, the Odessa/FLB team is also converging on the site of the mine.)

The Death Merchant's group finds the gold - behind several walls of rock and wood - and hauls it up. They are in the process of loading it onto boats to take out to a submarine when the Odessa/FLB team arrives at the beach. A fierce shootout ensures, and Camellion and the ARC prevail.

There are two other subplots mentioned a few times in the book: the possible murder of Patton by his own troops because he found out about the gold heist and disapproved and a cryptic comment made by Castile. Rosenberger does not return to these story strands at the end of the book.

Regardless, High Command Murder is well-paced, though I miss the goofiness of the first 20 books (or so) of the series. And once again, of more interest to me than the main plot are Rosenberger's odd turns of phrase and his political/social offshoots.

Camellion talks some more about being able to see people's auras and, judging by what colour they are, knowing if they are going to die soon or not. (Black is a bad colour!) As one footnote states: "The human aura can be seen with a photomultiplier tube under certain conditions. Psychics can see the human aura with the 'mind's eye.' So can men and women who have lived very close to death." (I presume Camellion falls under that final category.)

"And Grojean, he's so paranoid about security, he's more close-mouthed than a clam with lockjaw."

"This is about as bad as trying to plow a potato field with a dull-bladed plow."

"[E]veryone - except Camelllion - was, nonetheless, surprised with the suddenness of the assault when it did come. The Death Merchant wouldn't have been amazed is Adolf Hitler had pedaled by on a tricycle."

"It was the same with Jordan and Capeau, slugs buzzing around them like bees enraged with bronchitis."

"Those morons in England are so dumb they think the Bermuda Triangle is a musical instrument."

"What we need is a rabbit's foot, but not the kind that was carried by General Custer."

"If I wanted to talk to a fruitcake, I could have gone to a bakery!"

"I'll be a jackass on rollerskates! ... If I had half the sense of a moronic doodlebug I wouldn't even be here!"
Posted by allan at 4:10 AM