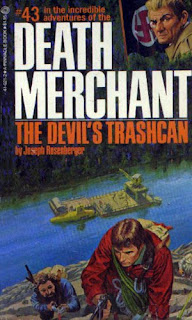 News flash from The Devil's Trashcan: Richard Camellion was once married!

Through 42 titles, Joseph Rosenberger has provided next-to-nothing about his hero's background. From scattered scraps gathered from the earlier books, we know Camellion is originally from St. Louis where he was a high-school teacher. In #43, Rosenberger drops the bombshell, when Camellion remarks, "A wedding is really a funeral where you get to smell your own flowers. I tried marriage once. I almost had a nervous breakdown from boredom." (But, sadly, Rosenberger provides no additional information.)

"The Devil's Trashcan" is the nickname Rosenberger has given to Lake Toplitz in the Totes Gebirge (Dead Mountains) of Austria. He describes it as a "dark and sinister body of water".

In the final days of World War II, Nazi leaders allegedly sunk waterproof metal cases in the lake. According to Wikipedia, "Millions of counterfeit pound sterling notes (£100+ million) were dumped in the lake after Operation Bernhard, which was never fully put into action. There is speculation that there might be other valuables to be recovered from the bottom of the Toplitzsee." In addition to possible treasure, Rosenberger suggests there could be documents exposing some world leaders as former Nazi collaborators. There have been actual dives made over the decades, one as recently as 2005. Last year, the nephew of senior Nazi SS officer Ernst Kaltenbrunner (a character in The Devil's Trashcan) stated, "I can guarantee there is a lot of gold and vast treasures inside."

There are not too many plot twists in The Devil's Trashcan. It's all a matter of driving to the lake and getting to work. Which also means that there are minimal gunfights. There is a perfunctory ambush of the Death Merchant's caravan, but after that there's only the big, book-ending battle with Odessa, a group of ex-SS men who want to reclaim the buried cases. During the fight, Rosenberger mentions in one sentence that Camellion killed nine men by various means, and still provides nine pages of hand-to-hand combat. We get a steady dose of Yon Hon Nukite spears, Sangdon Chirugi punches, Hiju Uke elbow blocks, and plenty of Shuto chops. We even get "a right Chungdon Sudo Yop Taerigi middle knife hand side strike"! Yow!

Because of the lack of action, Rosenberger spends dozens of pages painstakingly going through the planning and preparation for the dive, giving readers way too much information about diving depths, decompression chambers, minutia about the construction of the diving platform, background information on the various Nazis, etc. Because the main characters are often sitting around, there are several discussions, similar to the political conversations in the previous book, High Command Murder. It's the usual stuff about the degradation of American society, which is blamed (mostly) on immigrants. I don't agree with these sentiments, but I find their existence fascinating. There is no reason to have them in any of these books; they are not germane to the plots in any way. Plus, they are often awkwardly stuck into conversations, offtopic and unprovoked. (Did other action-adventure authors include similar pontificating in their books?)

For example, the Austrians ask Camellion where he calls home. The Death Merchant says simply, "Home is wherever I happen to be." But it's obvious that he's an American.

A sly glint crept into the eyes of Gerhart Kausch who was sitting to Camellion's left. "I should think our American friends would be happier in this part of the world than in their own United States," he said with deceptive gentleness. "Most European news magazines are in agreement that American society is becoming more mongrelized. Your government lets in 150,000 Cubans and blacks from Haiti, not to mention a few hundred rice farmers from southeast Asia, all of whom breed faster than rats." He laughed harshly. "If the American government doesn't change its ridiculous policy, twenty years from now the trash on welfare will outnumber the hard-working European-Americans supporting them with their tax dollars."

Franz Ritter, on the sofa across from Camellion, chimed in happily.

"Everyone agrees that Castro made a fool out of President Carter, whose refugee policy was costly, unrealistic, a spit in the face of the American unemployed, and gave the whole world a big laugh. And if our own intelligence reports are correct, Castro intends to swamp the United States with another hundred-thousand of his scum to relieve chronically disastrous and rapidly worsening economic conditions in Cuba. Frankly we Europeans find it all very amusing. Now the North Vietnamese and Castro have fifth columns in the U.S. - all of them disguised as economic refugees."

Camellion is usually quick to correct anyone - and sounds like a smug, know-it-all in the process (even his friend Vallie West (who has come out of retirement) feels like slugging him in annoyance at times), but all he does here is make a joke about what an "unrealistic idiot" Carter was for trusting "the Soviet pig farmers". But then a CIA case officer takes offense to blaming Carter. "You should have mentioned that any bill the President might want can be vetoed by Congress. I suggest you put the situation in perspective and quit putting all the blame on any President." Camellion, in an apparent contradiction from his attitude on the previous page, has these internal thoughts:

Right on, Junior! Right on! The hell of it is that Blotz and the two krauts are right. Our transport protection system is ripped apart. Our borders are indefensible. Our weather is being tampered with by the pig farmers. We're at the mercy of the Arab blanket riders and doing nothing about our national defense. Our measuring system is all that's holding us together. Convert to total metric - which is another ripoff and the product of Washington paperpushers - and the world will swallow us alive in one gulp.

WTF? The avoidance of the metric system is the only thing that is saving the United States from total collapse?!?!? Hoooo kay ...

Elsewhere in the book, Camellion explains that thanks to affirmative action, "if a white American even whispers that any Black is less than perfect, he's labelled a racist." ... He refers to Koreans as "pajama clad gooks". ... Camellion also offers his informed opinion on the inevitability of an imminent third World War. Camellion's words are chilling to Vallie West because he knows that "Camellion had a track record of being right."

"This war you spoke about," Duckworth said. "Why all the concern, if we Americans and the Chinese are going to annihilate the Soviets?"

"I didn't tell you the rest of the sad tale," Camellion said. "After the Russians are destroyed, the Red Chinese will sweep across Asia into Europe. With that will come the total destruction of the United States - a full-scale nuclear war. History will sweep the world clean and the survivors will begin all over again. It's all part of a cycle. It has happened before. It will happen again."

Camellion, a serious misanthrope with few kind words for anyone, chides mankind for killing defenseless animals. After a shootout, someone remarks that now "there's a little less evil in the world, not much less, but a tiny bit less".

The Death Merchant, reloading the AMPS did not reply. Damned little! Even the "nice people" are ruthless savages. Sixteen million cats and dogs will be put to death this year because nobody wants them. A hundred and eighty thousand baby seals will be clubbed to death - and many skinned while still alive - this year, simply because they have beautiful fur! To hell with the human race!

In addition to discovering the one-time existence of a Mrs. Camellion, we learn a bit more about the DM: He drinks "carrot juice laced with Deidesheim, a rich German wine" and "ice coffee laced with a jigger of brandy". We learn what some of his vitamins are: choline and procaine. (Why would Camellion take an anaesthetic, often used by dentists?)

Vallie West has fought alongside Camellion several times over the years, but the Death Merchant remains a stranger:

West gave Camellion a long, speculative look. There was never any way to glean a clue of Camellion's thoughts. His body language was always mute and his expression usually inscrutable. Vallie often sensed that he really didn't know Camellion. He never had. Neither did anyone else. The Death Merchant had always been totally self-contained, a man who needed no one, a man who loved no one, a man who was a stranger to his own species; and maybe that was the way it should be.

And even for a supposed friend of the Death Merchant, the mysterious Camellion can be too much:

There were times when West felt like belting Camellion in the mouth. Rick was too intensely analytical, his mind too probing. Too damned intellectual! Vallie told himself. Superstition? Vallie thought of the time he had visited Camellion's Memento Mori Ranch in the Big Thicket region of southeastern Texas. Never again! During the week too many mysterious things happened. Vallie had heard strange noises in the night . . . subtle whispering, and shadows, caught for only a moment from the corner of the eye, shadows that didn't behave like shadows. Vallie was positive that Camellion dabbled in certain ancient and secret sciences. He didn't know what these sciences were, nor did he want to know.

West shares Camellion's avoidance of curses, exclaiming "Hippo crud!" and "Crocodile crap!" on two occasions. Also, here are these three wisecracks that West and Camellion yell at various Nazis before sending them into the blackness of eternity:

"Take a slow bus to Disneyland, you dip-stick dummy!"

"You're a piece of dirty trash. Your mother was a slut and your father was a growth of slime from a dung heap. What are you going to do about it, you son of a diseased bedbug?"

An interesting final note. During a conversation with Camellion, West remarks:

He reminds me of a joker I know back in the States. Hell, if you say "Good Morning" to Rupt Rosenberger, he'd end up giving you a national weather report.

Is "Rupt Rosenberger" meant to be author Joseph Rupert Rosenberger?
Posted by allan at 1:20 PM