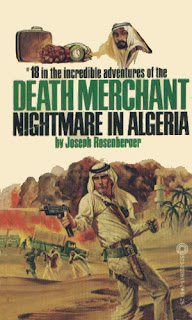 Richard Camellion (the Death Merchant) is undercover in Algeria as "Christopher Landsdowe", a missle guidance expert wanted by the US for sedition. He's meeting with members of the Black Avengers, who have formed an alliance with the Blood Sons of Allah , a Palestinian terrorist organization. The groups are plotting to kill the U.S. President and Secretary of State, and the President of Egypt. The Death Merchant's mission is to wipe out both Algerian groups.

Camellion's cover is blown when he is recognized by Russian spy Irina Golbov, who has infiltrated the Avengers. (Golbov previously appeared in DM #5: Satan Strike. When she is asked later how she knew who Camellion was, she lies and says she was at the Mountains of the Moon, from DM #15: Vengeance of the Golden Hawk.) The Death Merchant escapes a wild shootout and retreats back to the house of Israeli agent Roger Chauvel and his wife.

Nightmare in Algeria is the fifth of six (!) Death Merchant books that Rosenberger published through Pinnacle in 1976. The hectic pace of banging out these adventure novels must have been exhausting, and Rosenberger makes several obvious errors. Only Dr. Umari knows Golbov's true identity; the Black Avengers know her as Leila Shukairy. However, in a strategy meeting with the Avengers, Umari calls her "Irina" four different times over two pages. Late in the book, Camellion has someone who has been quite dramatically shot to death about 12 pages earlier return to life and appear in a different scene. Rosenberger usually refers to the Sons of Allah is S.O.A., but sometimes he uses O.A.S.

Rosenberger is amusingly transparent when it comes to giving information to the reader:

"Then I'll have to go to the Casbah [dressed] as an Arab, perhaps as an old Berber," Camellion countered slyly.

"No, not as a Berber," Marie said softly, "since the name Berber is derived from the Latin barbari, which means 'barbarians.'"

"Very well, then as an Imazighen, the Berbers' own name for themselves. I believe the name means 'man of noble origin.'"

And when Camellion arrives at an olive oil processing plant to attack a meeting of the Sons of Allah, Rosenberger shares some of his extensive research with us:

The olive itself is a small, pretty evergreen tree. Growing between twenty-five and forty feet tall, the tree has white flowers and a small, shiny fruit that is purplish-black when ripe. But some olives are picked before they are ripe, or when they have developed a dull or yellowish green color; these olives are treated with special preparations and are sometimes pickled. To obtain the olive oil, unripe olives are pressed by a machine, the result a clear, yellowish oil that has many values. Not only is the oil used as a dressing for salads and for cooking, but many medicines contain olive oil, which is valuable as a laxative. It is also used in making soaps and dyes.

Camellion (as usual) is not shy about his anti-religion views. When a compatriot says, "God had better be with us", Camellion sneers:

God? Do you mean the Old Testament God, who garnered such an impressive list of atrocities - the God who demanded and sanctioned human sacrifices? As I recall, Jehovah himself was fond of directly exterminating large numbers of people, usually through pestilence or famine, and often for unusual offenses. ... No, my friend. We don't need the help of any cosmic Adolf Hitler!

The Death Merchant states he is fighting this mission "only for money", not to benefit Israel, which he calls "a nation of pious thieves who go about stealing Arab lands in the name of ridiculous superstition".

When asked if he is afraid of dying, Camellion says, "There is no such thing as death. Dying is only a brief illusion in a universe full of life, a universe of constant transition. Most things are illusion. What was reality only a moment ago is now obsolete." (He's deep, man.)

A tried red sun, preparing for sleep, chinned itself on the horizon, its feeble light falling on Algiers. In the daytime, the white buildings of the beautiful city which lay in a green amphitheater of hills, with the blue Mediterranean washing its shores, glitters [sic] in the bright sunlight. ... The Old Quarter, which centers on the Casbah, or citadel, is on a large hill and its "streets" are frequently stairs. Here are old houses with nail-studded doors and latticed balconies overlooking the narrow lanes.

A bizarre mention of Richard Nixon, whom Rosenberger/Camellion hates:

... his chances for life were less than those of Richard Nixon's being elected pope of the Hazy Hexagon Church of Homely Homosexuals!

Poor Shafik Jamil had neither the reflexes nor the experience of Richard Camellion. With the exception of Mack Bolan, another deadly crime fighter known as The Executioner, very few men had.

Then, on the next page, Camellion is described as a "killmaster", the name of yet another action series (Nick Carter). Rosenberger actually wrote one of the Carter books: #125, Thunderstrike in Syria, in 1979.

One character tells another: "Don't get your balls in an uproar". According to The Concise New Partridge Dictionary of Slang and Unconventional English, this phrase dates back to 1961 and is of Canadian military origin.
Posted by allan at 4:49 PM