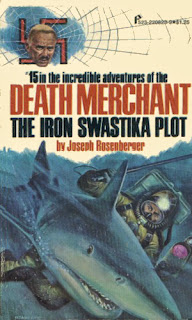 The secret Nazi organization known as The Spider returns! Camellion had battled them in #6: The Albanian Connection.

In The Iron Swastika Plot, the Spider is searching for a German submarine that was sunk off the coast of Argentina near the end of World War II. It was carrying $2 billion in gold and diamonds, as well as some important Nazi papers. The Spider wants the jewels in order to finance its operations.

The overall plot of The Iron Swastika Plot is fairly mundane. In fact, we don't find out who excavated the sub until an "Epilog" at the end of the book. Also, Rosenberger repeats himself. As he did in #8: Billionaire Mission, Rosenberger has Camellion involved in a fierce shoot-out at sea, before the DM jumps aboard the enemy boat and raises hell. Rosenberger also packs in a ton of information on diving suits, water pressure and issues with breathing at various depths, etc., as well as the workings of an undersea camera.

The true highlight of this book is Rosenberger's unique writing style: the bits of purple prose, the bizarre turns of phrase, and the detailed descriptions of nearly every bullet's passage.

First of all, while some characters use expletives, the Death Merchant does not. In previous books, he sometimes yelled "Fudge!" when things were not going his way. Here, Camellion uses the term "Donkey dust!" no less than five times.

"[Captain Skittone] quickly looked away, thinking of how Cain had called Camellion 'Death Merchant.' To Skittone that mean that Richard Camellion was the Michelangelo of anxiety and the da Vinci of Death."

Nazi Ludwig Baber: "Who else but the Death Merchant kills with uncanny speed? What other man in the world thinks faster than lightning?"

"Cain suddenly had the feeling that he was the guest of honor at a party given by a firing squad, as he stared at the two funeral processions marching in the Death Merchant's glittering blue eyes. ... The tough Lieutenant Commander [Mangrum] had heard vague rumors and whispered stories about the lean man standing before him, this quick-moving individual who talked like Western Union and in whose blue sharp-shooter eyes one could envision newly cut tombstones. Was Camellion actually the fabled Death Merchant?"

"He gave Camellion a long, penetrating look, and suddenly, not liking what he saw, felt a chill. Here was no ordinary man. There were ten thousand future funerals in the depths of those freezing blue eyes, and a resilience, an unearthly springiness that abhorred the sterility of the normal, of all equilibrium."

"One grabbed him low in the groin and put two brand new entrances in his colon. The second poker-hot 9mm bored into his midriff, mangled his pancreas, and went bye-bye through his back."

"Fish-Face got the business from the Death Merchant a tenth of a second later. His portal vein cut in two, the mesentery of his small intestine a mess from a Bushmaster .223, Fish-Face corkscrewed to the floor, unconscious and almost dead ..."

"The tall, thin Valles was only thirty years old, but the daily pursuit of women and liquor had taken its toll over the years, and he looked forty. Now he looked dead, both of the Death Merchant's slugs having torn apart his heart and lungs."

"Gunther Busch - a sawed-off Kraut-head who had the appearance of a man who took a daily bath in dishwater - had even less of a chance at life. Camellion's left Magnum exploded again and vomited a slug which was almost as huge as the end of a man's index finger. It cut through Busch's upper lip, knocked out three of his front teeth, blew out the back of his head, and kicked him into Deathland. He feel faster than overcooked sauerkraut, the Haenel submachine gun slipping from his hands."

"The hitman, his life expectancy zero, pulled the trigger of the Walther submachine gun just as Camellion's two 9mm slugs struck him in the chest and in the stomach. He cried out, danced a short waltz that wasn't the 'Blue Danube,' and fell backward ..."

"She was centered between the baby buggy and the Walther chopper, still firing her small pistol, when the Death Merchant kicked her into hell to join Hitler, putting a P-38 9mm slug into her left side. The former call girl made a noise like a chicken being plucked alive ..."

"He burned them so fast their nervous system didn't have time to register the agony generated by the .223 steel tearing through their organs and snapping their bones. The two Germans twisted like pretzels and died in a spray of blood, falling to the floor in front of Alfonso de Beche, a flat-faced Brazilian gunmen who looked like the kind of a moron who'd think an avalanche was a mountain getting its rocks off! A red-hot .223 slug tore off de Beche's left hand, and for a minimoment he stared in profound horror at the stump of his wrist jetting a thick stream of red. Another .223 bored into his gut. He crashed to the floor, made a noise like a pig snorting in mud, gave a final grunt, closed his eyes, and found out what death was all about."

"Firing short bursts to keep the opening clear, he stormed in low through the jagged hole, the Bushmaster roaring, tossing out steel annihilation in a great, wide arc. ... Diego Maximo Rubicaba, the other Spanish idiot in the room, got the big business in the belly - four slugs that made his colon think the entire universe had collapsed."

"In contrast, Camellion's Bushmaster slugs stitched Gutierrez from the base of his neck to his tail bone, each .223mm slug blasting apart his spine and making a mess of his insides. Gutierrez shriveled up like a piece of bacon in a too hot skillet and quietly began frying in hell."

"The Death Merchant was not a happy man. In fact, he felt lower than the belt buckle of a deep-digging mole."

"Walking quicker than a crippled flea tap-dancing on a hot brick, he thrust the nozzle of the extinguisher toward the doorway ..."

"The corridor was as empty as an old maid's dream ..."

"While a closed mouth gathers no foot, it can acquire a .357 Magnum slug."

"In spite of his shattered wrist, [Raul Cano] tried to reach down and retrieve the precious 9mm Llama, but his chances for success were less than those of a crippled turtle trying to outrun a bolt of summer lightning."

"Camellion finished the man off with a mule-kick to the scrotum. Looking like an idiot who had just discovered that ice cream cones are hollow, the man melted to the deck, pathetic moans coming from his throat."

"The [train] car became a madhouse, the blossoms of calm blooming into flowers of hysteria ..."

"Experience is a hard teacher. She gives the test first, the lesson afterward."

"Eternity was only a dimension in time and space and had nothing to do with the affairs of man."