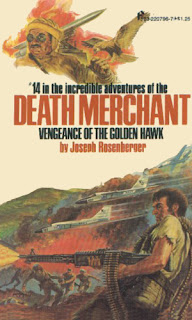 Richard Camellion (aka the Death Merchant) infiltrates a Palestinian terrorist group known as Vengeance of the Golden Hawk, in order to locate and destroy a nerve gas missile the VGH is planning to detonate over Tel Aviv. It could kill upwards of 300,000 people, and if that happens, Israel will retaliate with nuclear weapons, and that would be the start of World War III.

The book begins with Camellion and a Jordanian agent named Yassine Bahnassi being placed in an Amman jail cell that also houses three members of the VGH. Camellion engineers a breakout (when he explains his plan, one of the men says, "The scheme is so crazy it might work" (!)), and the five men stick together in a safe house on the outskirts of Jordan.

Camellion's cover story is that he is a semi-rogue US military explosives expert and is looking to sell some stolen weapons. The three VGH members are impressed with Camellion ("The organization could use a man of your unique talents") and agree to take him and Bahnassi to the Mountains of the Moon, the VGH's headquarters in Syria - which is also (handily) were the missiles are stored.

At this point, it's clear that the main action of the book will be when Camellion gets to the Mountains of the Moon and swings into action. But author Joseph Rosenberger has pages to fill, so we get a couple of shootouts as the five men, in disguise, make their way to Damascus, where they are ambushed in Mina Square. They also fight a bunch of PLO soldiers while crossing a wadi. Finally, they get to MotM, where they meet the head of VGH: Faraq al-Khatid. Some of Al-Khatid's men believe Camellion is a "Jew spy", but the story the three men tell of Camellion's bravery during their travels is convincing.

Camellion and Bahnassi are supposed to meet up with a Harquad agent who has infiltrated the VGH, but it takes six days for Assaf Budny to make himself known. Finally, the three men begin their raid on the radio control room, the first step towards destroying the arsenal. The initial shoot-out was pretty convoluted. Honestly, it would have helped if Rosenberger included a map of the cliff dwellings. There are buildings above and below - and to both sides - of the arsenal from which the DM and his two cohorts are fighting off the VGH. Since Rosenberger is intent on describing every bit of action from every angle, it gets a bit confusing.

Budny, who had taken a position by the west wall, by the center window. Assaf was watching the west side balcony of the building above the arsenal. ... Budny had a clear view not only of the east side porch but also a portion of the steps [from the east balcony to the arsenal] ...

Rosenberger is on clearer ground when it comes to describing the gore, as Camellion sends an assortment of VGH fanatics on a "one-way passage to deathland":

Three guerrillas, butchered by slugs, danced a quick jig of death and fell over the railing of the long balcony. A man on the steps took a slug in the gut, one in the chest, and three more in the face. Without a head, his brains flowing down ahead of him, he pitched off the steps, hit the west edge of the roof, bounced off, and kept falling, trailing a stream of blood like the red tail of a comet.

(Rosenberger often gives names to all of the bad guys, even if they get "cowboyed" in the same paragraph. I suppose since he's intent on describing the layout and how everyone is shooting, it helps to identify people if they have a name.)

After they get out of the arsenal and climb down the cliffs, the Death Merchant still has to contend with a French Panhard armoured car with a 60mm turret cannon and a Soviet BTR-40 personnel carrier. Fortunately, he's carrying some blocks of RDX explosives.

Finally, Rosenberger delivers his expected mention of fruit, though he waits until page 173, seven pages from the end of the book: "Kaouki died faceless and brainless. The Death Merchant's chain of 7.65mm slugs exploded his head, which flew apart like a rotten melon."
Posted by allan at 6:32 PM