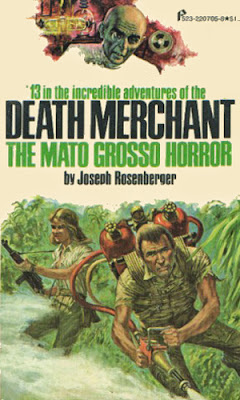 In The Mato Grosso Horror, Richard Camellion heads an "archeological expedition" that is trying to locate a group of former Nazis, headed by Doctor Klaus von Linderbock, who have constructed a laboratory in the "hell-hot" Brazilian jungle and are working on a powerful mind control drug. They have been secretly testing the drug on the Carajas natives. With the drug, the Nazis plan to unite Germany and regain Europe - and then the world!

From various reviews of the Death Merchant series, I know that author Joseph Rosenberger filled more of the later books with his own political and social beliefs, from straight American ultra-conservatism to the occult. (His anti-religion stance has been crystal clear since the first book. Here, Camellion dismisses missionaries who venture into the jungle - "one of the most unexplored regions on earth" - armed with little more than Bibles as "idiots to begin with".)

Early in the book (published in September 1975), Camellion opines on the feminist movement while the members of the expedition are double-checking their cache of supplies. The narrative suddenly stops after Major Ryan refers to Monica Belone, an anthropologist, as "Miss Belone". She replies that, "if you don't mind, I prefer to be addressed as 'Ms.'"

[Major] Ryan looked startled. Then he looked as if he wanted to laugh.

"Oh, that 'Ms.' business!" He grinned broadly. "To me that means either 'manuscript' or 'multiple sclerosis!' but if you want to be called 'Ms.,' that's okay by me."

Monica didn't appreciate Ryan's comments, and her brown eyes flashed in anger. She folded her arms over her breasts (which were slightly larger than two fried eggs) and said stiffly, "It's gratifying to know that some men have the good sense to realize male supremacy is on its way out in all the industrialized nations, that it was just a phase in the evolution of culture."

Relighting his cigar, Ryan did not reply. But Camellion did.

"Maybe so, but I'm not very optimistic about the net results of the democratization of sex relations," he said, his eyes on the planes, rather than on 'Ms.' Belone. "The death of male supremacy may simply mean that the sexes become equally powerless, rather than equally powerful. For example, if we continue with the present economic system, the sexual democratization of the labor market will result not in women improving their position, but in a period of worsened conditions for both sexes."

The Death Merchant turned and raked Monica with his icepick-like gaze. "To be specific, the kinds of advantages that have been obtained by women act against the better interests of black women and poor women. I say that because mobility for women depends on education; and it is middle-class women who get the best educations, the most opportunities, and the best jobs."

"Apparently, Richard, you are not familiar with the work of Claude Levi-Strauss and the French structuralists. The emic-etic debate has . . ."

"I'm not interested in self-appointed messiahs who prefer theories and ignore facts. One of those facts is that middle-class families will have both marriage partners working, and that will pull their incomes even farther away from those of working-class families. In short, Ms. Belone, the opening up of certain jobs for limited categories of women may actually mean more economic deprivation for poor people in general!"

He smiled at the angry but subdued young woman. "But all that doesn't have anything to do with this expedition, does it?"

And with that dismissal, the main story continues.

Also, Rosenberger must have done a ton of research on the jungles of Brazil - and he was clearly determined to put it all into the book. The Mato Grosso Horror is packed with information about Brazil, its wildlife and plants. However, Rosenberger isn't really able to integrate his research materials smoothly into the narrative. Here is some info snakes and other hazards of the jungle:

There were more than thirty species of poisonous snakes in that special kind of Hades, divided into two general families: the colubrids and the vipers, such as the corals, short-fanged, which caused them, to hang on and chew after striking. The pit vipers were much worse - two subfamilies or genera; first, the many tropical cascabelas, like bushmasters (aggressive, extremely vicious, no rattles to warn you with); the fer-de-lance, a long-fanged killer, called the jararaca, a night rover and 94 percent fatal; and, of course, the yacu maman, or anaconda, so huge it could swallow a man whole!

The forest would be denuded of game and other foods. There was El Tigre, the man-eating jaguar, hunting in singles or in pairs; crocodiles; pana - two varieties, first cousins of the meat-eating piranha; the ten-foot cannibal zungaro or tiger fish; and giant electric rays capable of electrocuting a man. There were scores of jungle diseases. Ants whose single bite could cause blindness. In short, just staying alive and halfway healthy was a full-time job in the Mato Grosso!

Besides the snakes and other dangerous animals, there are also two tribes of "savages" to contend with. The Carajas are cannibals and "the most warlike tribe in South America". While providing pages of information about the fictional tribe, what they wear and how they paint their faces, Rosenberger helpfully notes that the women are "attractive for savages ... some of them were quite shapely".

At one point, Rosenberger has one of the Carajas alert the Nazis as to Camellion's group's progress: "Drums they say white man-devils close to the land of the Muraitos. Drums they say Muraitos plenty mad and make chop-chop-kill of white devils." Rosenberger also indulges in some casual racism, having the explorers battle the "jungle lollipops", "painted gooks", and "South American jungle bunnies".

The death count in this book is well over 1,000. The various battle scenes are more one-sided than usual, as the DM and his cohorts have automatic weapons and grenade launchers, while the Muraitos and Carajas natives have only spears and arrows. (The Carajas guarding the village in which the Germans are located have modern weapons, however.)

As they make their way through the jungle, our heroes have to take refuge in a cave while battling two bands of Carajas warriors. The Germans then set off some explosives, sealing off the cave's entrance with tons of rocks! It's the end of a chapter - and when the next chapter begins, the group is out of the cave and has made several days' progress towards the Germans' village. ?!?! It's a total cop-out by Rosenberger, as he explains how they escaped being buried alive in only a few sentences.

The Nazis are found, and the DM and his team of 10 men split into two groups and attack the compound from two sides. (Ms. Belone does not participate in the final battle.) During the all-out fire-fight, Camellion narrowly survives a hail of slugs (naturally):

The Germans open fire! In the center of a hurricane of hot steel, he reached the top, jumped over the rim, and zigged and zagged, moving at a left angle on a one-way route for life. A nine-millimeter Heckler & Koch slug sang sinisterly by his left ear. Hot steel from a 7.92mm Krieghoff automatic rifle came within half an inch of drilling a couple of bloody tunnels through the top of his cap-covered skull. Damn! I should have gone into the hardware business with my father! A loud zinggg as steel smashed into steel and his right hip felt as if it had been hit with the head of a hammer. But it hadn't been. A 7.92mm from a St.G. Mauser assault rifle had cut through the metal sheath and had struck the steel blade of his M-4 bayonet-knife. Another 7.92 blob of steel barely raked across his left hand.

Also, Rosenberger adds to his list of food used to describe carnage: "Three more [Walther slugs] opened up his chest and split his skull the way a macana would chop apart a kisva melon!"
Posted by allan at 6:44 PM